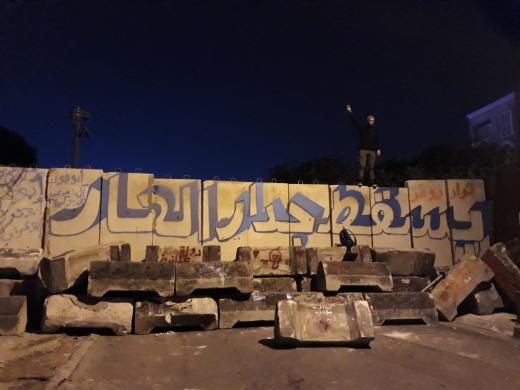 Authorities in Beirut strictly control access to the city’s main sites, especially during times of turmoil. On December 17, authorities set up metal barricades near Place de l’Etoile to keep protesters from getting close to Parliament. The next day, they built a concrete wall near Place Riad el-Solh, which is known as the epicentre of the protest movement.

The unprecedented protest movement that has been sweeping Lebanon over the past months seems to be entering a new phase. After more than a hundred people were injured in clashes with the police on the weekend of December 14, the Lebanese government seems to have adopted a much more heavy-handed strategy for dealing with the protesters.

Two days after these clashes, the authorities launched into an aggressive security strategy, including the installation of metal barricades affixed to the ground near several different entrances to parliament.

Quite a few people took to social media in Lebanon to criticise the construction of this wall, using the hashtag #جدار_العار (wall of shame). Some pointed out that this isn’t the first time that the authorities have carried out a similar initiative. Back in 2015, during a waste collection crisis in the capital, a similar wall was built to fence off the seat of government.

In 2015, they built a cement wall in front of the Grand Serail to block protesters from getting close. Today, they’re putting up fixed metal barricades to block people from coming near Parliament (WA video). #LebaneseRevolution pic.twitter.com/bjpLMIPVZt

Some people put lit candles on the wall as a form of peaceful protest.

“The protesters can’t get closer than 100 metres from parliament”

Adham Hassanieh, a member of the “Li haqqi” (“For my rights”) movement, which has helped to lead the protests, says that it is now impossible to get anywhere near parliament.

On December 14 and 15, riot police fired tear gas and rubber bullets at any protesters who tried to get close to the Parliament. Videos also showed police using their truncheons on demonstrators.

The protests had been taking place ahead of parliamentary consultations where a new head of government was to be named following the October resignation of Saad Hariri. The consultations were originally slated to begin on December 16 and were finally moved to Thursday, December 26 for security reasons.

I think that the implementation of these extreme methods goes way beyond just wanting to make sure that the nomination of the new prime minister went smoothly. The metal barricades were bolted into concrete pillars, which shows that these unprecedented measures are being installed to last. The government has finally realized how determined people are. The protests are becoming larger and more intense and the protesters are going farther in terms of confrontation. The authorities are hoping that this kind of hardline strategy will counter all that.

“The government is so scared of its own people that it chased them out of the town centre!”

Rim Mouawad took part in the protests on the weekend of December 14. He says that this isn’t just about parliament– protesters are also being banned from other spaces, as well.

We want to get Place de l’Etoile back — she belongs to us!  The people in the streets want our demands heard. We want technocrats (is this right?) who aren’t corrupt and don’t have any political ties, to be in office. We want to be close to the parliament buildings as we need to be able to pressure the representatives during their parliamentary sessions. But they want to keep us as far away as possible so they can make the decision themselves. They are preventing us from accessing any political institutions. For example, when we planned a protest in front of the Presidential Palace, we were forced to meet more than a kilometre from Baabda Palace. The state is so afraid of people that it is clearing them out of the town centre.

On the nights of December 16 and 17, tensions boiled over. This time, it was a scuffle involving security forces, the protesters and young people from Amal and Hezbollah, parties that support the current government. The youth came in to vandalise tents belonging to protesters that had been set up on Place Riad el-Solh. However, they also threw firecrackers and fireworks at police.

On Wednesday morning, another concrete wall was built, blocking one of the streets leading towards Place Riad el-Sol, at the behest of Interior Minister Raya el-Hassan. The government claimed that the wall made the protesters safer and made the job of the riot police much easier.

This photo shows the wall near Place Riadh el-Solh. A graffiti artist spray painted the phrase “Down with the wall of shame!”  (Photo by Rim Mouawad)
Adham Hassanieh thinks that the government is willfully trying to divide people.

It’s the role of the government to promote constructive dialogue when there is a conflict between two segments of the population. To build bridges, not walls. The Lebanese government exploits religious arguments to divide us and weaken us. But the people in the streets don’t want to hear this message. This political oligarchy doesn’t like public spaces because they could shake the foundations of its power.

Our city friends, who are also part of the protest movement, already say that there are not enough public spaces in Beirut where people can gather. The government also wants to deprive us of the places that do exist. They want to make our city into a place where it is really hard to gather for a protest.