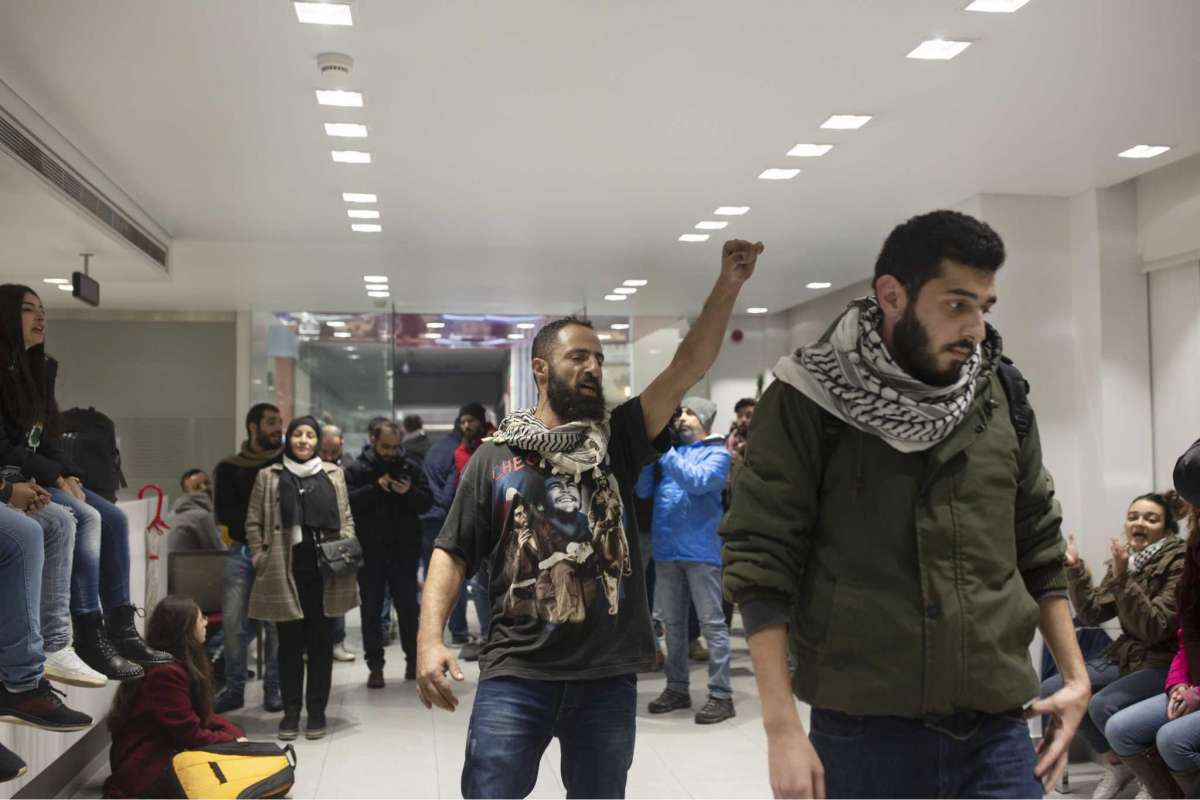 BEIRUT — Dozens of Lebanese protesters held a brief sit-in inside a bank in Beirut and another in the country’s south on Saturday, part of their focus on banking policies they complain are inefficient and corrupt.

Lebanon is facing its worst economic crisis in decades, while protests against corruption and mismanagement have gripped the country since October. The local currency has taken a nose dive, losing more than 40% of its value after over 20 years of being pegged to the dollar. Banks are imposing unprecedented capital controls to protect their deposits amid a deepening confidence crisis. Meanwhile, layoffs and salary cuts are becoming the norm while politicians bicker over forming a new government.

Dozens of protesters entered a private bank in the commercial Hamra district in Beirut, protesting capital controls and insisting that no one would leave without the money they came for. Banks have put a withdrawal ceiling of $200 a week on most accounts, while totally blocking outside transfers.

“Thieves! Thieves!” two dozen protesters chanted, some sitting on counters and others on the floor. Bank staff watched and security guards did not interfere.

The protesters later helped a woman with a cane get to the second floor, again shouting that she wouldn’t leave until she got the money she needs. The protesters posted videos of their actions on a Twitter account linked to the protest movement.

At another bank in the southern town of Nabatiyeh, a dozen protesters entered the branch chanting “Down with bank rule.” Inside the bank, a citizen complained about how he can’t withdraw money to pay for his son living abroad as well as his employees, yet the bank continues to charge him for a loan he took. “Enough of that!” the man said, according to another video posted on Twitter.

The protesters have also organized a campaign called “we are not paying” asking depositors not to pay their loans amid the tight capital controls.

The anti-bank protests were fanned by recent comments from the Central Bank’s governor saying he doesn’t know how much more the local currency will lose its value. Riad Salameh’s comments to reporters Thursday deepened panic in the highly dollarized economy.

Lebanon imports most of its basic needs, and is one of the world’s most indebted countries. Some protesters are calling for banks to finance imports instead of servicing debts.

Lebanese officials have asked foreign countries and financial institutions to help secure needed capital for imports. Donors have called for major reforms before extending help — a request that will likely be delayed amid infighting between political groups over the shape of a new government.

Prime Minister Saad Hariri resigned on Oct. 29 and continues in a caretaker capacity.

The prime minister designate, Hassan Diab, former minister was named on Dec. 19, and is backed by the militant Hezbollah group and its allies. However, he has failed to win the backing of the main Sunni Muslim groups.

Some protesters have also rejected him, saying he is still part of the ruling elite they accuse of corruption.

Later on Saturday, about 300 protesters rallied outside Diab’s house in Beirut, chanting: “We don’t want Hassan Diab,” or “Don’t dream of it, Diab.” One protester told the gathering, which included many who traveled from the northern city of Tripoli, that from now on the protests would take place outside Diab’s home until he withdraws.