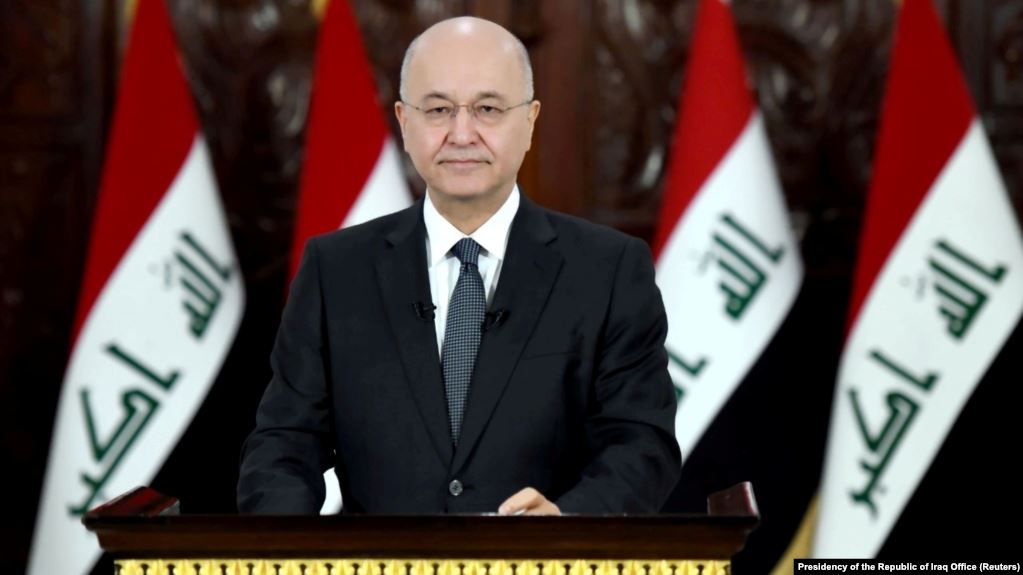 Protesters want an independent candidate to be nominated as the country’s new prime minister.

Iraqi protesters have voiced support for their president’s threat to resign rather than accept a pro-Iran coalition’s candidate for prime minister.

President Barham Salih has resisted recent attempts by a pro-Iran coalition to put forward nominees for prime minister that included a resigned minister and a controversial governor, Asaad al-Eidani.

On Thursday, Salih said he was “ready to resign” rather than accept a candidate already rejected by the protest movement that brought down the previous government. Some 460 people have been killed and 25,000 injured since the demonstrations broke out in October demanding deep reform that shows no sign of abating.

The protesters are calling for an end to corruption and a complete overhaul of the country’s political system established after the US invasion, which critics say has allowed the political elite to enrich themselves while much of the country’s population struggles economically.

With the country plunged into crisis, some were hoping that the weekly sermon of influential Grand Ayatollah Ali Sistani would offer a way forward.

The 89-year-old is Iraq‘s top Shia leader and his opinion has long been influential in the country’s politics. But he remained silent on the political situation on Friday, instead restricting his comments to religion, further distancing himself from the ruling elite.

Reporting from Baghdad, Al Jazeera’s Dorsa Jabbari said that the candidate rejected by Salih, Basra Governor Asaad al-Eidani, was known to be close to the Iranian-backed groups within the Iraqi Parliament and has also been accused of corruption in his own province.

“The president has said he is not willing to [accept his nomination] because there is such a strong opposition on the streets to that nomination,” Jabbari said.

“[The Parliament is] really at a loss as to what to do constitutionally. This is a first for Iraq and their constitution isn’t really equipped to handle this kind of situation … but it’s very unlikely that they will actually accept the resignation from him.”

In Baghdad’s Tahrir Square – the epicentre of the protest movement – a banner was unfurled overnight alongside portraits of rejected candidates for the premiership with their faces crossed out in red.

“Thank you Barham for siding with the demands of the people and rejecting the candidates of corrupt parties. We are with you,” it read.

Separately, in a statement on Friday, protesters called the Iran-backed groups “blocs of corruption” that are doing everything they can to ensure that sects and ethnic groups hold the country’s top posts.

However, Ali Mohamed, a protesting teacher in Babylon province south of the capital, told the AFP news agency that Salih’s resignation would lead to chaos and give the political parties even more control over the country.

“The president needs to stay to resist these parties; he is the only barrier in place to ensure that a nationalist candidate is nominated” for prime minister, he said.

‘An agent of the Americans’

However, Iran-supported groups on Friday blasted Iraq’s president, saying his decision was made at the behest of the United States, and warned him to not name anyone who could be “an agent of the Americans”.

In a statement, the Hezbollah Brigades, or “Kataeb Hezbollah”, called Salih’s move “suspicious”.

“We know that he is carrying out an American will that aims to pull the country toward chaos,” the statement said.

The Iran-affiliated groups said the president had violated the Constitution “by refusing to carry out his duties” to name the candidate chosen by Parliament’s largest bloc.

The pro-Iran bloc that claims to be the largest in Parliament – and should, therefore, be entitled to nominate the prime minister – called on legislators to “take legal action against the president for violating the Constitution”.

But the list of ex-prime minister Haider al-Abadi, now in opposition, called on Salih to “reconsider his resignation” and work with all towards a “radical change in the balance of power”.

Al-Abadi’s list – which came third in the last elections but has since lost many of its legislators to the pro-Iran camp – said blocs must “abandon the mentality of treason, intimidation and domination” threatening to plunge Iraq “into the unknown”.

The pressure mounted by the pro-Iran camp is enormous, according to the Wataniya list of secular former premier Iyad Allawi.

The list applauded Salih’s “civic position” but called on him to stay on to form a “reduced transition government” under United Nations supervision to lead Iraq “from this impasse”.

Separately on Friday, several rockets were launched into Iraq’s K1 military base, housing US and Iraqi forces, near the oil-rich city of Kirkuk, according to a statement by the Iraqi military. It was not immediately clear if there were any casualties.