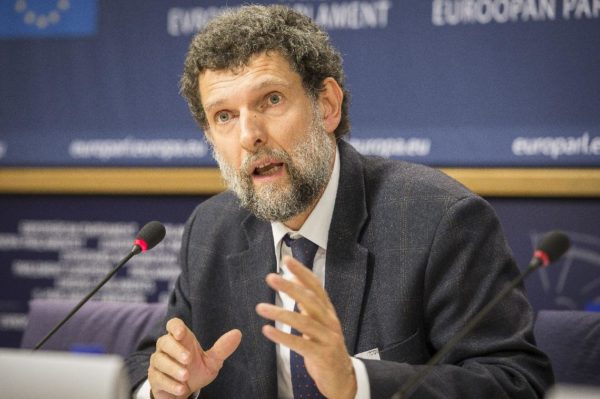 Osman Kavala speaks at a press conference at the EU Parliament
Share:

SILIVRI – A Turkish court on Tuesday ruled that a businessman charged with seeking to overthrow President Recep Tayyip Erdogan’s government should remain in jail, despite a demand by Europe’s top rights body for his release.

Osman Kavala, a leading figure in Turkey’s civil society who funded projects across the country, has been in pre-trial detention since November 2017.

Turkish prosecutors accuse him and 15 other leading figures in civil society of being involved in anti-Erdogan protests in 2013 and the failed coup in 2016.

Kavala, who appeared in the dock wearing a dark jacket and a white shirt, dismissed the charges as “completely groundless”.

“The 657-page indictment… proves I am innocent rather than guilty,” he told the court.

The Turkish court in Silivri in the outskirts of Istanbul set the next hearing for January 28.

The crowd in the courtroom applauded Kavala as he was taken out. He was seen saluting back to his supporters.

Two weeks ago, the Strasbourg-based European Court of Human Rights (ECHR) urged Turkey to “take every measure to put an end” to Kavala’s detention and “to secure his immediate release”.

In a damning verdict, the ECHR said Kavala was being held “not only on acts that could not be reasonably considered as behaviour criminalised under domestic law” but which were also guaranteed by the European Convention on Human Rights.

“I demand this unlawful and discriminatory practice that placed me in prison for two years come to an end,” Kavala told the court.

Critics have denounced the charges as politically motivated and an example of Turkey’s crackdown on civil society.

Erdogan has accused Kavala of being a Turkish agent of US financier George Soros.

The court also heard testimonies from two police officers who were on duty during the 2013 mass protests in Istanbul.

“In my personal opinion, Gezi was a protest that exceeded its purpose and caused serious damage,” said one of the officers, Ercan Orhan Aydin.

The nationwide protests in 2013 were sparked by the government plans to demolish Gezi park — the only green space in the centre of the city.

But the police officer said he did not know any of the defendants and was not aware whether they were involved in any violent act at the time.

“I saw Osman Kavala here for the first time,” he said, when asked by the defence lawyer.

Turkish MPs from opposition parties as well as diplomats from foreign consulates and international observers attended the hearing in a show of solidarity, although it coincided with Christmas Eve.

A respected figure in intellectual circles, Kavala is chairman of the Anatolian Culture Foundation, which promotes human rights through art, including with neighbouring Armenia, with which Turkey has no diplomatic ties.