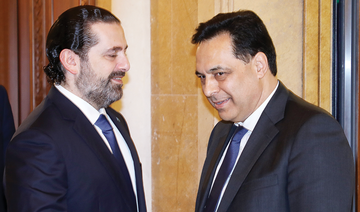 Debt-burdened Lebanon has been without a fully functioning government since caretaker prime minister Saad Hariri resigned on October 29 in the face of nationwide protests.

Demonstrators are demanding an overhaul of the political establishment which they deem corrupt and inept, insisting on a government of independents and experts with no ties to the country’s sectarian parties.

Diab, a 60-year-old engineering professor, was designated prime minister on Thursday with backing from the country’s Iran-aligned Shiite Hezbollah movement and its allies.

But Hariri’s Sunni bloc did not endorse his nomination, along with other key Christian and Druze Muslim parties and have said they will not take part in Diab’s government.

The former. minister considers himself a technocrat and is hoping to set up the new cabinet within four to six weeks and has said he wanted to choose experts to join the line-up, calling on demonstrators to give him a “chance” to carry out the task.

The challenges he must overcome became clear however from the onset of Saturday’s talks with various officials and lawmakers.

Parliament speaker Nabih Berri said he “insists on securing representation for all parliamentary groups,” in the next government — a position shared by his Shiite Amal party and Hezbollah.

Samir al-Jisr, a deputy from Hariri’s Future Movement, urged Diab to form a government “of independent experts not affiliated with established political parties,” to rescue Lebanon from the brink of collapse.

“Considering that this government, just like Diab’s nomination, will be supported by only one political stripe, then its formation should take less than” a month or six weeks, he said after meeting the premier-designate.

He was referring to allies Hezbollah, Amal and the Free Patriotic Movement founded by Christian President Michel Aoun who chose Diab to form a cabinet.

Such backing has sparked an uproar, with Sunni supporters of Hariri blocking roads and scuffling with security forces in Beirut and other cities for the past two consecutive nights to voice their opposition for Diab.

Some roads remained blocked on Saturday in Sunni-majority second city Tripoli and in the northern Akkar region.

Hezbollah sought to appease the anger of the protesters on Saturday, insisting that the next government will not be lopsided.

“No one should think the government will be one of confrontation or one endorsed by only one political stripe,” said Hezbollah MP Mohammad Raad after meeting Diab.

The new government, he said, will seek to “revitalise” the economy that has taken a beating since the unprecedented protests began on October 17.

Since then, tensions have been heightened by the looming bankruptcy of the debt-burdened Lebanese state.

A dollar-liquidity crisis has pushed banks to impose informal capital controls on dollar deposits and the Lebanese pound, officially pegged to the US dollar, has lost around 30 percent of its value on the black market.

The faltering economy has pushed several companies to close, while surviving businesses try to stay open by paying half-salaries and laying off employees.

A recession of more than 0.2 percent is expected for this year, the World Bank says.

The international community, donors, and financial organisations have warned that debt-saddled Lebanon could ill afford any delay in getting a new government.

The United States, France and other allies of Lebanon have warned they would withhold financial support until a government that can demonstrate willingness to reform can be formed.

Multi-confessional Lebanon is ruled by a complex political system that seeks to maintain a fragile equilibrium between political parties representing the country’s major confessional sects.