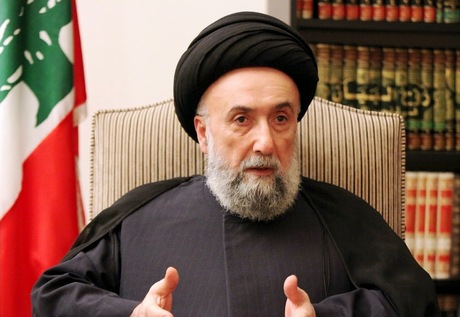 Ali al-Amin a prominent Shiite cleric blasted Hezbollah on Wednesday after the latter’s accusations that he is “normalizing ties with Israel.”

“Treason campaigns against me by Hezbollah are not something new and are due to my rejection of the Iranian project they carry to Lebanon and the region,” said al-Amin during a press conference.

Hezbollah denounced the participation of Amin in a religious forum in Bahrain attended by “Zionist figures” and accused him of “normalizing” ties with Israel.

He accused the party and the “mother Shiite institution” in Lebanon of launching “treason campaigns and fabrications.”

On his participation in the Bahrain forum that allowed the participation of Israel, he said: “I took part in the forum without knowing the participants’ names,” noting it was also attended by Lebanon’s ambassador to Bahrain.

“I will remain opposed to Hezbollah’s policy of oppression and domination. The Shiite duo’s policy only brings harm upon the Shiite community,” he said.

The former Mufti of the City of Tyre is an outspoken critic of Hezbollah and its allegiance to the Iranian leadership and the so called Wilayat al Faqih.

Back in June 2009 he responded to a statement by Hezbollah’s ally the founder of FPM and current president of Lebanon by explaining what allegiance to Wilayat al Faqih means to us in Lebanon .