US House impeached Trump. Here’s what happens next 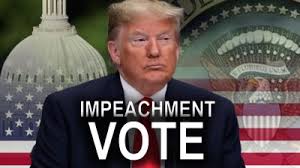 Donald Trump is now the third president in U.S. history to be impeached by the House.

Democrats on Wednesday night voted for two articles — abuse of power and obstruction of Congress — after eight hours of debate on the House floor, where hundreds of lawmakers traded barbs for and against impeachment.

The historic votes capped a three-month inquiry by House Democrats into Trump’s dealings with Ukraine. But the impeachment process is far from over: The proceedings now move to a trial in the Senate, which holds the final authority on whether to convict Trump and remove him from office, or to acquit him.

Republicans hold a 53-47 edge in the chamber. Conviction and removal requires 67 votes. No Senate Republicans have signaled that they would vote to convict Trump.

Here’s what to expect:

House lawmakers may be passing the impeachment reins to the Senate, but they still have business to take care of.

After the votes to impeach Trump, House Democrats will select so-called impeachment managers to appear before the Senate during the trial and share findings from their inquiry.

House managers have historically been members of Congress, who assume the role of prosecutors in the Senate trial. For instance, 13 Republicans from the House Judiciary Committee acted as the managers in then-President Bill Clinton’s Senate trial, presenting their case for his removal over three days.

The president will be represented at a Senate trial by his own attorneys, likely to be led by White House counsel Pat Cipollone.

Senators in the Republican-controlled upper chamber act as a jury in a presidential impeachment trial. But unlike a jury in a criminal trial, the senators aren’t selected and screened through an examination process that filters out possible jurors who are biased or unfair.

Some senators have already made their views of the Democrats’ impeachment efforts abundantly clear.

“I would anticipate we will have a largely partisan outcome in the Senate. I’m not impartial about this at all,” Senate Majority Leader Mitch McConnell, R-Ky., said Tuesday.

In a Fox News interview last week, McConnell said: “Everything I do during this, I’m coordinating with the White House counsel.”

Sen. Lindsey Graham, R-S.C., one of Trump’s closest allies in the chamber, was even more blunt in a recent interview: “I have made up my mind. I’m not trying to pretend to be a fair juror here.”

There is technically a chance that the Senate could move to dismiss the trial by simple majority. But such a move would be likely be met with a political backlash, and some Republicans have already signaled that they would prefer to win a vote on acquittal rather than dismissal.

It is expected that Roberts, a conservative-leaning swing vote on the high court bench, will seek to minimize his role in the trial. But like it or not, the presiding officer will likely wield immense power in the trial.

The rules from Clinton’s 1999 trial, which could be largely carried over into Trump’s, give the chief justice the discretion to “rule on all questions of evidence” and “direct all the forms of” impeachment proceedings.

Roberts’ predecessor, William Rehnquist, described his own experience presiding over Clinton’s trial as a “culture shock.”

WATCH NOWVIDEO09:12White House in crisis: The latest on impeachment

McConnell rejected that request and slammed Schumer for diverging from the precedent of Clinton’s impeachment trial.

But Roberts could grant a direct request from Democrats to subpoena Mulvaney or Bolton to appear before the Senate to give live testimony, American University law professor Robert Tsai said in an interview.

Such a ruling from Roberts would likely be challenged by a Republican senator, triggering a vote, according to the Clinton-era rules. In that circumstance, Democrats might prevail if they can sway a few Republicans to vote in Roberts’ favor.

“That would be the most dramatic thing, I think, that could happen during such a trial,” Tsai said.