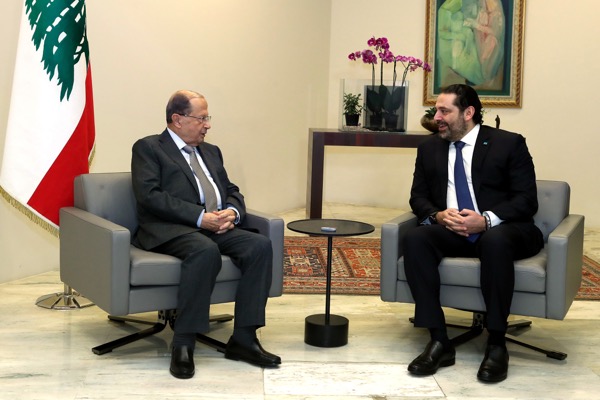 The reports said the talks tackled “the governmental developments on the eve of the binding parliamentary consultations” to pick a new premier.

Hariri, the leading Sunni Muslim politician, is widely seen by politicians as the only candidate for the post. He quit the job in late October under pressure from protests against the political elite that has overseen decades of corruption and bad governance.

But he is at odds with Iran-backed Shi’ite Muslim Hezbollah movement and its allies, including President Aoun, over the make-up of the next government.

Hariri tendered his government’s resignation on October 29, but bitterly divided political parties have failed to agree on a new premier ever since.

In a multi-confessional country often in political deadlock, the name of the new prime minister is frequently picked before symbolic parliamentary consultations.

The protesters have demanded a government made up solely of experts not affiliated to the country’s traditional political parties, but analysts have warned this could be a tall order.

Lebanon needs a new government to pull it out of the worst economic crisis since its 1975-1990 civil war. Foreign donors will only help after there is a cabinet that can enact reforms.

Hariri wants to lead a cabinet of specialist ministers which he says would be able to tackle the crisis and attract foreign aid, while his opponents want a combination of politicians and experts.