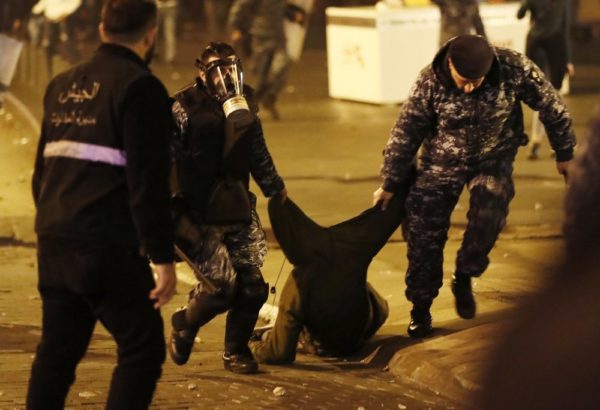 Riot police officers arrest an anti-government protesters trying to enter parliament square in downtown Beirut, Lebanon, Saturday, Dec. 14, 2019. The recent clashes marked some of the worst in the capital since demonstrations began two months ago. The rise in tensions comes as politicians have failed to agree on forming a new government. (AP Photo/Hussein Malla)
Share:

Lebanon’s Interior Minister Raya El-Hassan on Sunday ordered the country’s security forces to open a “rapid and transparent” enquiry, after dozens of people in Beirut were wounded in clashes the night before.

Security forces in the capital used tear gas and rubber bullets to disperse demonstrators, who had gathered Saturday evening to demand an independent technocrat government ahead of talks due to begin Monday to appoint a new premier.

Hassan demanded the identification of those responsible for the most violent episode since the largely peaceful anti-government protests began on October 17.

She warned against “infiltrators” seeking to use protests to provoke “confrontations”.

Amnesty International’s Diala Haidar decried the “excessive use of force” in response to “overwhelmingly peaceful protest”.

“The intention was clearly to prevent protesters gathering,” she said, denouncing the presence of masked men in civilian clothes joining security forces in “violently attacking protesters”.

“Political authorities should get moving because the country is in a dramatic situation,” he told French public radio.

Lebanon’s government stepped down on October 29, but bitterly divided political parties have subsequently failed to agree on a new premier.

Saturday’s clashes erupted at the entrance to the street leading to parliament, as security forces beat protesters who tried to breach metal police barricades.

Lebanese civil defence took 36 injured to hospital and treated 54 people at the scene, the organisation said on Twitter.

The Lebanese Red Cross transported 15 injured to hospital and treated 37 people on site, an official with the organisation told AFP.

Both protesters and security forces were injured, the organisation said, with some affected by tear gas and others struck by hurled stones.

Lebanese security forces said on Twitter about 20 from its ranks were hospitalised, while others were injured and treated on the spot.

The clashes lasted several hours until the first hours of Sunday.

Protests calling for the complete overhaul of a political class deemed inept and corrupt have been generally peaceful, but clashes have increased in recent weeks.

The protesters have demanded a government made up solely of experts not affiliated to the country’s traditional political parties, but analysts have warned this could be a tall order.

The process of forming a government will take place as Lebanon faces a deepening economic crisis.