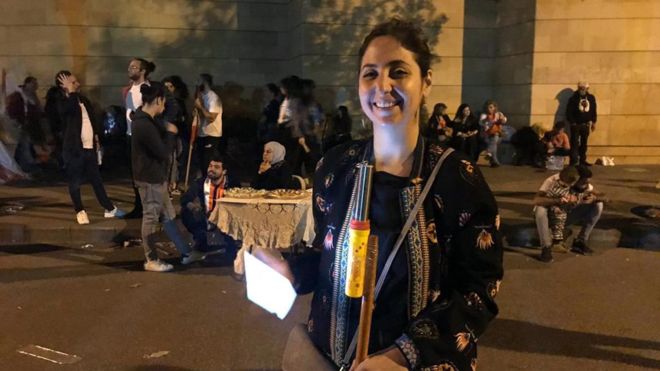 Young protesters have camped outside the headquarters of state power company EDL
Share:

It is the moment when, every other day, the apartment goes dark and silent. The lights, the fan, the TV, the fridge, all go off.

The next day, at the same time, they all come on. And that is how it has been – on-off, off-on – for more than 10 years, in his house, and most others in Lebanon.

The country’s national grid can supply only about half the electricity people want.

And that means misery for Mohammed, a 73-year-old retired driver with chronic lung disease, who lives in the country’s second city of Tripoli with his wife and five daughters.

“I can’t turn on the air conditioning. I can’t boil water. I can’t even pump water into my apartment,” he says.

“We have to plan our daily activities based on the cut-offs. We don’t shower. We don’t wash our clothes. We have to throw food away all the time because the fridge isn’t working.”

But now, Lebanon’s six million people have had enough of blackouts.

A constant energy supply is one of the main demands of an unprecedented wave of protests that has swept the country over the past two months.

It has brought hundreds of thousands of people out onto the streets, and forced the government to resign.

The state electricity company, EDL, has been one of the main targets of their anger.

Young demonstrators have camped outside its headquarters in a tower block in the centre of the capital Beirut.

“It’s crazy to think that we’re in 2019 and still have three hours a day when there is no electricity,” says Lara Kais, 33, who helped organise the protest camp.

She is talking about Beirut – in other places the cuts can be up to 17 hours a day.

The energy shortage is a result, partly, of years of under-investment in power plants.

And that, in turn, is due at least partly to the difficulty of taking strategic planning decisions in Lebanon’s cumbersome political system, where power must be shared between the main religious communities.

The protesters want to dismantle that system.

They suspect the power shortage suits many politicians who, they say, have links with private generator operators – the people who profit from the failures of the national grid.

Most Lebanese pay two electricity bills – one to EDL and the other to their local generator owner.

They switch to private power when blackouts hit, but it is much more expensive. And, technically, running private generators is illegal. That means the suppliers need political cover.

In Tripoli, some of the generator owners are former militia leaders who defended their communities during deadly sectarian clashes between 2011 and 2014, when members of the city’s Sunni Muslim majority and Alawite minority communities fought each other.

Chadi Nachabe, a city councillor and former political activist, says: “After the clashes finished, there was under-the-table permission for those people to open private generators.”

He says that, in return, the security forces expected generator operators to provide free electricity to some communities to ensure their loyalty to the government in elections.

But many others are getting free electricity through theft.

t is estimated nearly half the power EDL supplies is stolen, which further explains the lack of funds for investment.

Electricians who boast of being “Robin Hoods” specialize in illegal hook-ups. They tap power from communities where the lights are on, and re-direct it to those suffering blackouts.

“Adam” – a “Robin Hood” in Tripoli who does not want to give his real name – says: “I only do it for people who I feel are really in need and are poor and cannot get electricity from elsewhere.”

“It is stealing – I can’t say it’s not – but it’s a de facto situation that the state imposed on us.”

In particularly poor areas, such as the Shatila Palestinian refugee camp in southern Beirut – a labyrinth of narrow streets and crudely-built, overcrowded breezeblock houses – almost everyone survives on stolen power. Every building is festooned with intricate tangles of wires.

But without them Aissa Rashid might not be alive today.

He suffers from lung failure and can only breathe with the aid of an electricity-operated oxygen machine attached by a tube to his nostrils.

When the official supply goes off, the family switch to an illegal hook-up – only going over to an expensive generator if the stolen power also fails.

Several times a day, there are terrifying moments when the supply switches from one source to another – and Aissa, lying on a sofa in the living room, suddenly struggles desperately for breath.

“We survive on this anxiety that something bad might happen at any moment,” says Aissa’s son, Issam. “It’s terrible and frightening. We’ve had to live like this for five years.”

Will anything improve for his family?

The state electricity supply to Shatila is particularly low because one of the main feeder cables is broken. But it has not been repaired because of sectarian tensions between different parts of Beirut.

And that, many of the protesters would say, illustrates everything that is wrong in Lebanon.

The lights are unlikely to come on fully until the country’s whole political system is overhauled.