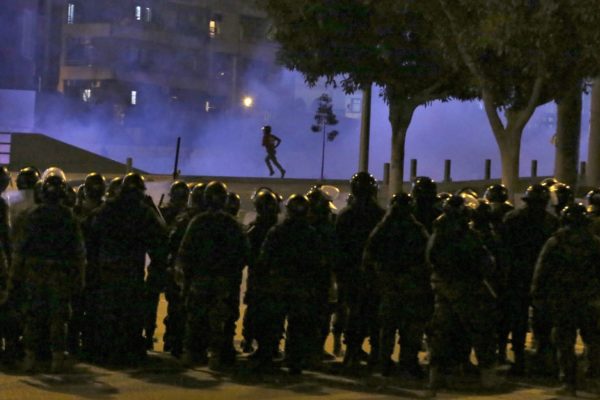 Riot policemen fire tear gas against the supporters of the Shiite Hezbollah and Amal Movement groups, who are trying to attack the anti-government protesters, in Beirut, Lebanon, Wednesday, Dec. 11, 2019. Protesters are demanding a government made up of technocrats that would immediately get to work on the necessary reforms to address the economy. (Bilal Hussein/Associated Press)
Share:

Tension rose in central Beirut when a group of young men tried to attack the epicenter of the anti-government protests, prompting security forces to fire tear gas.

Dozens of men threw stones and Molotov cocktails at anti-riot police who deployed to stop the advancing assailants.

Police pushed them back firing rounds of tear-gas. The group of mainly young men who came from the impoverished Khandaq al-Ghamiq area were chanting “Shia, Shia!” as they approached the area of anti-government protesters.

It is not the first time supporters of the two main Shiite groups in Lebanon, Hezbollah and AMAL Movement, attacked the protesters’ site.