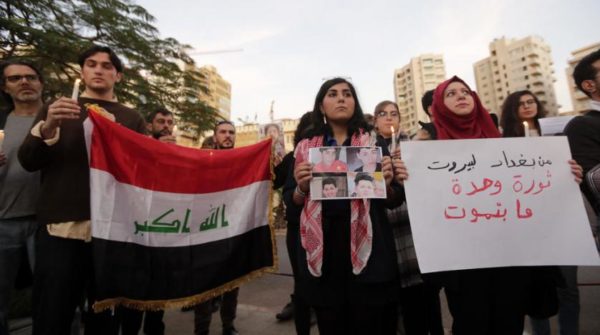 Lebanese protesters at the vigil carry the Iraqi national flag and a poster reading ‘From Baghdad to Beirut, one revolution that will not die. (AFP)
Share:

Dozens of people in protest-swept Lebanon staged a candlelit vigil outside Iraq’s embassy on Saturday to denounce the excessive use of force against demonstrators there.

Participants at the Beirut observance raised pictures of Iraqi protesters who have been killed in an unprecedented anti-government movement.

Some raised the Lebanese flag, while one woman wrapped the Iraqi tricolor around her shoulders, said AFP.

Iraq’s grassroots protest movement has been the largest the country has seen in decades — but also the deadliest.

More than 420 people have been killed and 15,000 others wounded since protests began on October 1, according to an AFP tally compiled from medics and an Iraqi rights commission.

The toll spiked dramatically this week, when a crackdown by security forces left dozens dead in Baghdad, the city of Najaf and the southern hotspot of Nasiriyah.

Nasiriyah is the birthplace of Prime Minister Adel Abdel Mahdi, who vowed to resign on Friday.

Layal Siblani, the organizer behind the vigil, said the spiraling violence in Iraq this past week prompted the show of solidarity.

Like their counterparts in Iraq, Lebanese demonstrators are rallying against corruption, unemployment and poor public services.

They are also pushing for an end to the kind of political system that prioritizes power-sharing between sects over good governance.

Despite confrontations with security forces and supporters of established parties, protesters in Lebanon have largely been spared the violent crackdown seen in Iraq.

But rights groups and the United Nations last week criticized Lebanese security forces for failing to protect protesters from attacks by backers of the Shiite Hezbollah and Amal movements.

Amnesty International on Friday also urged the Lebanese army “to end arbitrary arrests” and torture of peaceful protesters following a wave of detentions.

Lebanon and Iraq are ranked among the most corrupt countries in the region by anti-graft watchdog Transparency International.

At the vigil on Saturday, a demonstrator who gave his name as Hussein said that in light of excesses committed by Lebanese security forces, protesters had a duty towards their peers in Iraq.

“We have to stand in solidarity with our Iraqi counterparts who are being arrested and killed on a daily basis,” he said.