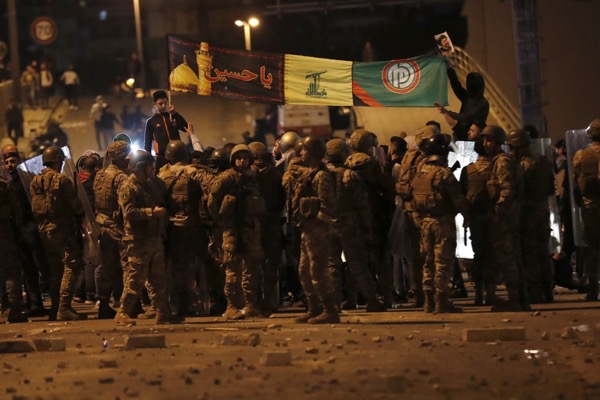 BEIRUT: For 40 days, Lebanese from all walks of life have demonstrated a sense of responsibility rarely witnessed in today’s hypersensitive world.

They have risked their own freedom to achieve freedom for all, putting aside differences that had divided them for so long.

Religion, sect and class had become second fiddle, paving the way for a clear set of demands: a government by the people, for the people.

40 days later and our elected parliamentarians and president have yet to appoint to a new Prime Minister.

A number of theories for the delay have been presented, yet it begs the question as to whether this signals a consorted effort by some to pit Lebanese against one another in a bid to buy time.

After 40 days of peaceful civil disobedience, Lebanon has now been dragged to the cusp of civil strife, bordering the outbreak of war.

Hezbollah and Amal supporters, as we have become accustomed to seeing, are front and center in these latest clashes.

They have attacked peaceful demonstrators in Beirut and Sour, destroying both public and private properties while flexing their militia-like muscles.

The lawlessness that has swiped over parts of the country is astoundingly conspicuous and eye-opening. The army and various law enforcement, which have been swift to arrest peaceful demonstrators for far less egregious crimes, have shown an extreme reluctance to address the issue.

No arrests have been made and no official has condemned the violence exhibited by these Hezbollah and Amal affiliates.

Instead, Amal leader Nabih Berri placed the blame at the feet of the peaceful protestors, warning of the dangers of roadblocks.

These men could even be heard chanting for a rerun of the May 11, 2008 armed clashes which resulted in 12 deaths and brought Lebanon to the brink of war.

Chants of “Shia, Shia, Shia,” echoed through Beirut’s cross-sectarian neighborhoods as hundreds of thugs descended on their trademark minibikes.

They had seemingly taken offense to the Ring Bridge being closed Sunday night and yet lashed out at nearby residents’ belongings.

Cars were destroyed and set on fire. Windows bashed and threats spray-painted on walls. Hours later, protesters’ tents in Sour were trashed and burned. The resistance, for all its previous glory, is being sullied and its reputation dragged through the mud.

An armed scuffle also broke out between Hezbollah and Future Movement supporters in the Cola neighborhood of Beirut, holding a mirror to the broader Shia-Sunni struggle in the region. Hezbollah, which now finds itself backed into a corner as popular support and foreign funding wanes, is seemingly resorting to scare tactics.

Wise Lebanese should be wary of falling into the trap, as history is filled with plots that have highjacked a peaceful political revolution.

The intervention of these tribal-minded aggressors in what had been a nonviolent revolution will surely add a combustible new dimension to the uprising in Lebanon.

It is our duty, and that of the armed forces, to ensure that history doesn’t repeat itself.