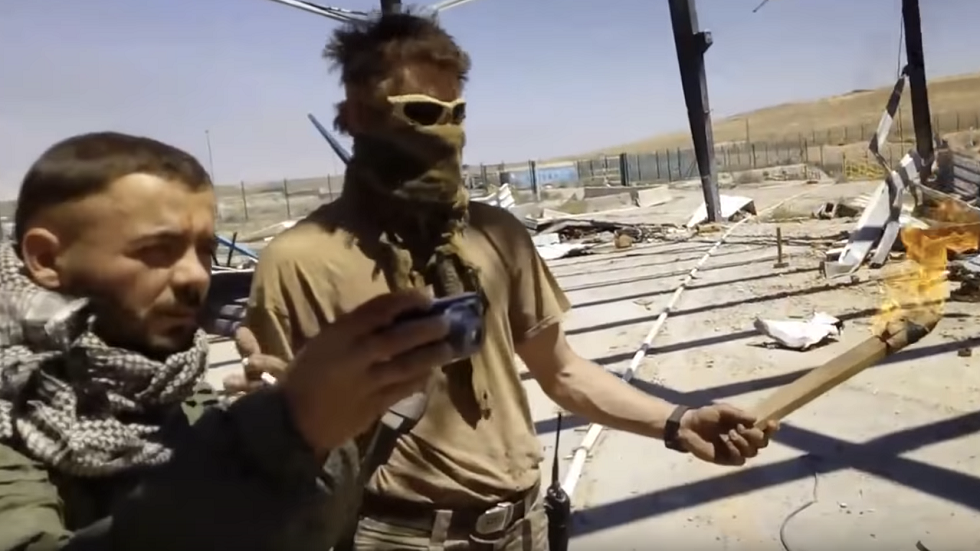 A screenshot from the footage showing the execution.
Share:

Russian newspaper says it has video evidence confirming the gruesome killing of a man in Syria two years ago was carried out by a Kremlin-linked private military company operating in the war-torn country.

Novaya Gazeta, which is often critical of the Russian government, first released in June 2017 an edited video showing four men pounding a Syrian man with a sledgehammer and chopping at him with knives.

At the time, it prompted speculation that the men belonged to the Wagner private military company. The company is said to be owned by Yevgeny Prigozhin, a businessman with close links to Russian President Vladimir Putin, and known as “Putin’s Chef” because of his catering business.

Never acknowledged by the Russian government, Wagner is said to be comprised of retired Russian soldiers who have fought wars on behalf of the Kremlin in Ukraine, Syria and the Central African Republic.Ads by scrollerads.com

This week, Novaya Gazeta revealed what it says is further video proof the men were linked to Wagner.

Footage shows four masked men discussing dismembering their victim. They are heard shouting, “Cut him harder, come on! Just break his spine! Use a shovel,” and “keep the legs, we’ll hang him by the legs.”

Another video shows men setting the victim who was named by Arabic news outlet Jesr Press and the Telegraph as Muhammad “Hamadi” Abdullah al-Ismail from the eastern province of Deir Ezzor, alight.

He had been conscripted into Bashar al-Assad’s army after returning from Lebanon, where he had initially fled.

The story has been reported in other outlets such as Meduza and The Moscow Times.

British newspaper The Telegraph quoted online sleuths who geolocated the torture site to al-Shaer oil fields in Homs, central Syria which was under Russian and Syrian government control at the time of the attack.

One of the men’s faces was seen briefly, and Novaya Gazeta said it used face recognition technology and corroborated his identity with his passport details and his non-disclosure agreement with Wagner. It named him as “Stanislav D,” refraining from publishing his last

When asked if the Kremlin knew about the actions of the fighters, Putin’s spokesman Dmitry Peskov said: “We do not have such information. This is not a matter for us, this is not a matter of the presidential administration,” state-run news agency Interfax reported.

Russia denies using any military contractors in Syria and says Russian civilians there are volunteers.

“In any case, I am convinced that this has nothing to do with the Russian military operation in Syrian,” he said, adding that fears it would impact on Russian army’s operation in Syria were “absolutely groundless.”

3- Hamadi from “Alkhorayta” village in #DeirEzZur countryside, he was in #Lebanon and got arrested when he get back to #Syria.#Russia #US pic.twitter.com/U6UPrL7TTQ