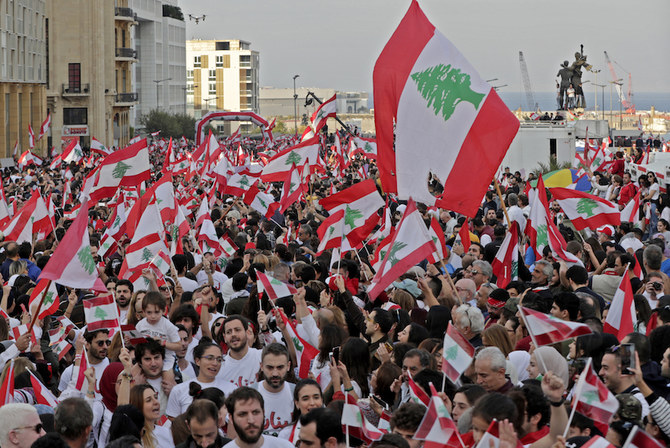 Lebanese demonstrators gather in Beirut’s Martyr Square during a gathering on Lebanon’s Independence Day on November 22, 2019, and more than a month into protests demanding an overhaul of the entire political system. – Lebanon marked 76 years of self-rule, with nationwide festivities by protesters taking centre stage in place of the traditional military parade to mark a first year of “real independence”. An unprecedented protest movement has gripped the small Mediterranean country since October 17, demanding the complete overhaul of politicians deemed inept and corrupt. (Photo by ANWAR AMRO / AFP)
Share:

Lebanon’s top politicians made their first joint appearance since massive anti-government protests erupted last month, attending a military parade as the country marked 76 years of self-rule on Friday. Protesters staged their own celebrations to mark a first year of “real independence”.

Demonstrators gathered for the alternative independence celebrations, converging by early afternoon on Martyrs’ Square in central Beirut, which used to be the traditional location of the official parade. Protesters have occupied the area, closing it off to traffic since mid-October.

The demonstrations that began on October 17 against proposed taxes on WhatsApp calls turned into a condemnation of the country’s political elite, who have run the country since the 1975-90 civil war.

“They don’t want the country to change. They want it to stay the same and they want us to leave,” said one protester who appeared in the square dressed as Charlie Chaplin and gave her name only as Joyce. “I am an actress. I don’t want to leave this country. I want to stay here, work here and live in Lebanon.”

The protests since last month have brought together people from different religious and political backgrounds, and given them hope of sweeping out a system they say is broken.

“It’s the first time Lebanese from all religious communities have protested en masse without a political party calling for it, and against all parties,” said 21-year-old university student Tamara.

Hundreds waved Lebanese flags and sang the national anthem on Friday, while marches set out from different neighbourhoods in the capital toward the square, the epicentre of the protests, facing the waterfront and near the government headquarters and parliament.

The limited official Independence Day display reflects the changing mood in Lebanon, which is facing its most serious political and economic crises in years. The leaderless anti-government protests have gripped the country since mid-October, while a deadlock among the top leaders has failed to produce a government three weeks after Prime Minister Saad Hariri resigned.

The protesters are calling for a new government and elections outside of the traditional sectarian-based power-sharing agreement.

Facing a plunging economy and high rates of unemployment, Lebanon’s young have played a leading role in efforts to topple the political elite they accuse of corruption and years of mismanagement that have left with little options but to migrate.

The actress raised a banner that read: “You people have the power to make life free and beautiful.”

A white banner was hung between two trees. Activists called on attendees to draw and “be creative” about how they want to commemorate independence. One person scribbled: “This is a popular Independence Day. Independence from a corrupt authority. November 22 is a day with a different flavour.”

At the official celebrations earlier Friday, Hariri maintained a stern expression during the military parade, while President Michel Aoun and Parliament Speaker Nabih Berri exchanged smiles. The leaders exchanged a few words during the 30-minute parade of marching soldiers. There was no display of tanks or helicopters and no foreign dignitaries were in attendance.

I just woke up to these images & video circulating, the sad part is the thugs who were forced to do this. Our politicians will keep fighting this revolution but it's too late. Today we celebrate our independence from them, that's the a way to free the thugs too @ProtestsLebanon pic.twitter.com/uW8MuVPOcT

Berri and Aoun immediately left after the parade ended, while Hariri milled around for a little longer exchanging words with the commander of the Lebanese Armed Forces.

A day earlier, Aoun had said a consensus on forming a government remained far off because of “contradictions that control Lebanese politics”. He didn’t elaborate. He also told protesters “only dialogue is the right path to resolve crises”.

In an ominous sign, unknown vandals set fire to a large cardboard fist in Beirut’s protest camp, which had become a symbol of the uprising. The first had been painted with the word “Revolution”.

Videos and photos circulating on social media showed the fist catching fire at dawn Friday. Protesters who were camped out in the square quickly tried to put out the blaze. A single protester defiantly raised his fist in the air beside the charred effigy.

Local media said the protesters are preparing a new effigy to be installed during the Independence Day parade they’re organising.