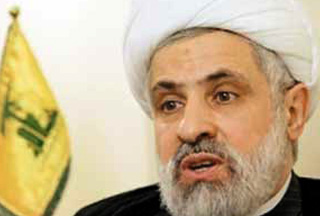 Hezbollah accused the United States of meddling in the formation of a new Lebanese government on Friday, its strongest accusation yet of U.S. interference in Lebanon’s political and economic crisis.

As Lebanon grapples with the worst economic crisis since its 1975-90 civil war, Hezbollah deputy leader Sheikh Naim Kassem told Reuters he did not see signs of a new conflict. Hezbollah would not be dragged into strife, he said.

He also said the economic crisis which has spread to the banking system was hitting the Shi’ite group’s followers along with everyone else in Lebanon. Hezbollah backed putting corrupt officials on trial “regardless of who they are”, he added.

Already grappling with an economic crisis, Lebanon has slid even deeper into turmoil since protests erupted against the ruling elite last month, fueled by anger over the corruption of the sectarian politicians who have dominated Lebanon for years.

U.S. dollars have grown scarce, the Lebanese pound has weakened and capital flight from the banking system has led banks to impose controls on depositors.

The protests led Saad al-Hariri to quit as prime minister on Oct. 29, toppling a coalition government that included the heavily armed Hezbollah.

Hezbollah, which is classified as a terrorist group by the United States, had more influence in the Hariri-led cabinet than any previous administration, reflecting a political balance that had tilted in its favor at elections in 2018.

Hariri, who is aligned with Western and Gulf Arab states, wants to return as head of a cabinet of expert ministers that would exclude other parties – terms that would effectively curb Hezbollah’s role.

U.S. officials had been in direct contact with Lebanese politicians and officials, he said. “Let them leave us alone so we can reach an understanding among ourselves. The more they intervene the more they delay the solution.”

Though they hold a parliamentary majority, Shi’ite Hezbollah and allies including the Christian Free Patriotic Movement continue to seek a deal with Hariri over a government which they say should include both politicians and technocrats.

Asked why Hezbollah and its allies had not opted to form a cabinet on their own, Kassem said the group preferred the prime minister be chosen through agreement with the main parties.

The position is reserved for a Sunni Muslim in Lebanon’s sectarian power-sharing system. Hariri is Lebanon’s leading Sunni. “There are continuous contacts between Hezbollah and Prime Minister Hariri to pick the prime minister,” Kassem said.

The United States has said it stands by protesters who are demanding reforms and an end to corruption, and that it is ready to work with a new government that can build a stable, prosperous and independent Lebanon.

PUTTING THE CORRUPT ON TRIAL

Sources close to Hariri have said he is sticking by his demand for a cabinet of experts because he believes it would be best placed to secure international support and steer Lebanon out of crisis.

Kassem said the first step towards dealing with the crisis would be the formation of a government which should start by implementing an emergency economic plan after amending it if necessary.

The causes of the crisis included by bad policies and corruption, he said.

“We support the people 100% in putting the corrupt on trial,” he said. “The corrupt must stand trial in Lebanon regardless of who they are … we support all measures that limit corruption and that recover looted wealth.”

The protests in Lebanon have been overwhelmingly peaceful despite occasional confrontations.

“I do not see signs of a civil war in Lebanon. Hezbollah is determined not to fall into strife that America wants. But we have information of American attempts to create some security problems,” he said.