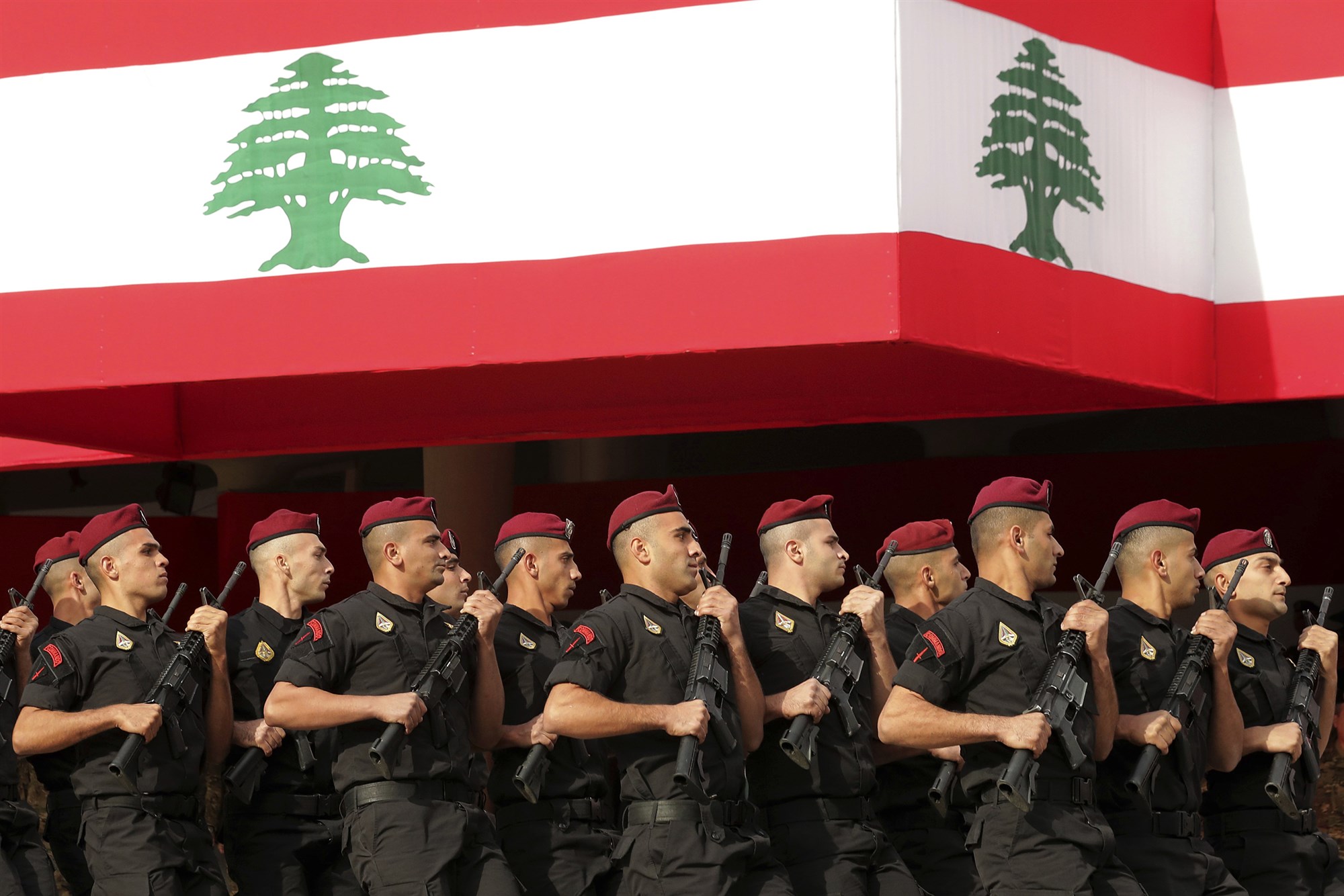 Lebanese marine special forces soldiers march during a military parade to mark the 76th anniversary of Lebanon’s independence from France at the Lebanese Defense Ministry, in Yarzeh near Beirut on Nov. 22, 2019.Hassan Ammar / AP
Share:

In his deposition, David Hale described growing consternation among diplomats as the administration would neither release the aid nor explain the hold.

WASHINGTON — The Trump administration is withholding more than $100 million in U.S. military assistance to Lebanon that has been approved by Congress and is favored by his national security team, an assertion of executive control of foreign aid that is similar to the delay in support for Ukraine at the center of the impeachment inquiry.

Secretary of State Mike Pompeo on Friday congratulated Lebanon as the country marked its independence day but made no mention of the hold-up in aid that State Department and Pentagon officials have complained about for weeks.

It came up in impeachment testimony by David Hale, the No. 3 official in the State Department, according to the transcript of the closed-door hearing released this week. He described growing consternation among diplomats as the administration would neither release the aid nor provide an explanation for the hold.

The White House and the Office of Management and Budget have declined to comment on the matter.

The $105 million in Foreign Military Funding for the Lebanese Armed Forces has languished for months, awaiting approval from the Office of Management and Budget despite congressional approval, an early September notification to lawmakers that it would be spent and overwhelming support for it from the Pentagon, State Department and National Security Council.

As with the Ukraine assistance, OMB has not explained the reason for the delay. However, unlike Ukraine, there is no suggestion that President Donald Trump is seeking “a favor” from Lebanon to release it, according to five officials familiar with the matter.

The mystery has only added to the consternation of the national security community, which believes the assistance that pays for American-made military equipment for the Lebanese army is essential, particularly as Lebanon reels in financial chaos and mass protests.

The aid is important to counter Iran’s influence in Lebanon, which is highlighted by the presence of the Iranian-supported Shiite Hezbollah movement in the government and the group’s militias, the officials said.

There is opposition to aid to the Lebanese army from outside the NSC. Pro-Israel hawks in Congress have long sought to de-fund the Lebanese military, arguing that it has been compromised by Hezbollah, which the U.S. designates as a “foreign terrorist organization.”

But the Pentagon and State Department reject that view, saying the army is the only independent Lebanese institution capable of resisting Hezbollah.

Although there are some issues, Jeffrey Feltman, a former U.S. ambassador to Lebanon, said this week that the assistance should be released.

“The U.S. has some legitimate concerns about the Lebanese Armed Forces’ performance, but the FMF should resume quickly and publicly: both because of the program’s merit in terms of improving the LAF’s counterterrorism performance but also to undermine the Hezbollah-Iranian-Syrian-Russian narrative that the U.S. is unreliable,” Feltman he told the House Foreign Affairs Committee on Tuesday.

Hale told the impeachment inquiry there were parallels between the Lebanon and Ukraine aid in that the White House refused to offer an explanation for the delays.

He said inquiries into the Lebanon assistance since June have been met with silence.

“We just understand there are differences of opinion on this, or there had been,” he said. “And the matter now rests with OMB. I don’t think that the differences currently exist outside of OMB.”

The Lebanon aid was put into Trump’s budget last winter and the State Department notified Congress on Sept. 5 that it would be spent even though the OMB had not yet signed off on it.

The State Department has offered only a cryptic response to queries, defending the assistance but also calling for Lebanese authorities to implement economic reforms and rein in corruption.

“As the sole legitimate defense arm of the government of Lebanon, the United States remains committed to strengthening the capacity of the Lebanese Armed Forces to secure Lebanon’s borders, defend its sovereignty, and preserve its stability,” the department said. “The Lebanon FMF has been apportioned by the administration. No Lebanese expenditures or purchases of military materiel with FMF have been delayed.”

“Apportionment” is a technical term that refers to federal funds that have been appropriated by Congress and obligated by the administration but have not yet been released.

However, several officials said National Security Council staff had deliberately tried to run an end-around of the Pentagon and State Department by demanding a signed presidential determination to release the aid and then slow-walking delivery of the finding to the Oval Office for Trump’s signature. The officials who were not authorized to discuss the matter publicly and spoke on condition of anonymity.

“It’s beyond the pale,” said one official. “This is people at the NSC and OMB trying to insert their own personal ideologies into something that most everyone else supports as a national security interest.”