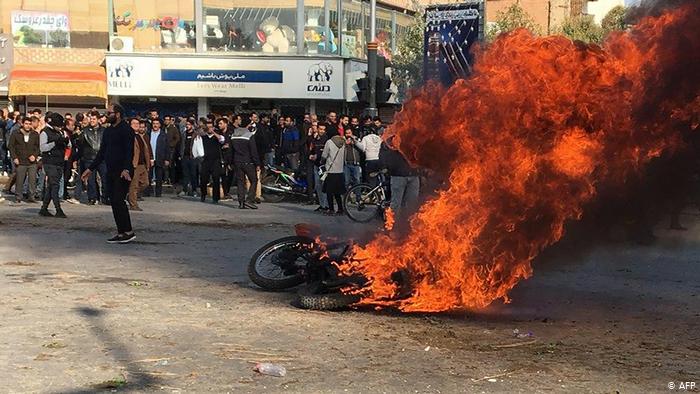 Protesters in Iran clashed with police on Saturday in dozens of cities and the capital, Tehran, angry at the government over the hike in the gasoline price.
Share:

The United Nations has urged Tehran to curb its use of force against demonstrators and restore Internet service amid a wave of protests sparked by a hike in gas prices across Iran that has left at least a dozen people dead.

The Office of the UN High Commissioner for Human Rights is “especially alarmed that the use of live ammunition has allegedly caused a significant number of deaths across the country,” spokesman Rupert Colville told reporters in Geneva on November 19, calling the extent of casualties “clearly very serious.”

Iranian officials have reported the death of 12 protesters and members of Iran’s security forces and said that more than 600 people have been arrested since the protests erupted on November 15, when the government announced it was rationing gasoline purchases and cutting subsidies amid biting U.S. sanctions imposed after President Donald Trump unilaterally withdrew the United States from a 2015 nuclear agreement.

However, Colville cited reports by Iranian media and other sources suggesting that “dozens of people may have been killed and many people injured during protests in at least eight different provinces.”

He also called on protesters to demonstrate “without resorting to physical violence or destruction of property,” amid reports saying that dozens of petrol stations, banks, shops, and other public property had been damaged or destroyed by protesters.

Earlier in the day, judiciary spokesman Gholamhossein Esmaili said that “calm has been restored in the country,” but the situation on the streets remains unclear largely due to an Internet shutdown imposed by the authorities.

Videos posted on social media in defiance of a near total Internet outage appeared to show overnight protests in several cities and a heavy presence of security forces in the streets.

“Sixty-five hours after Iran implemented a near-total Internet shutdown, some of the last remaining networks are now being cut and connectivity to the outside world has fallen further to 4 percent of normal levels,” according to NetBlocks, which monitors worldwide Internet access.

Brian Hook, Washington’s special envoy for Iran, told RFE/RL’s Radio Farda that the United States was working to help Iranians bypass the Internet outage, which has stemmed the flow of videos and communications shared on social media.

“We think that’s going to help some people connect to the Internet so that they can continue getting out their videos [of the protests],” Hook said.

Late on November 18, the semiofficial ISNA and Fars news agencies reported that three members of the security forces were stabbed to death by “rioters” near Tehran.

The three included a commander of the Islamic Revolutionary Guards Corps (IRGC) and two members of the paramilitary Basij force, the reports said.

Meanwhile, the hard-line Kayhan newspaper reported that the judiciary was considering “execution by hanging for the riot leaders a definite punishment.” The article did not elaborate.

The IRGC has warned protesters of “decisive” action if unrest does not cease, while Supreme Leader Ayatollah Ali Khamenei denounced demonstrators as “thugs” and blamed the turmoil on Iran’s foreign foes, including the United States.

The White House has condemned “the lethal force and severe communications restrictions used against demonstrators” and said it supported “the Iranian people in their peaceful protests.”

Iran, which has the fourth-largest crude-oil reserves in the world, still has some of the lowest fuel prices, which are supported by government subsidies.

Gasoline prices remain among the lowest in the world, even with the prices jumping about 50 percent under the new edict to a minimum of 15,000 rials per liter.

At about 13 cents a liter, the price is still less than one-fifth of the average cost of regular gasoline in the United States, and about a tenth of the price in Western Europe.