Palestinians outraged over US endorsement of Israeli settlements 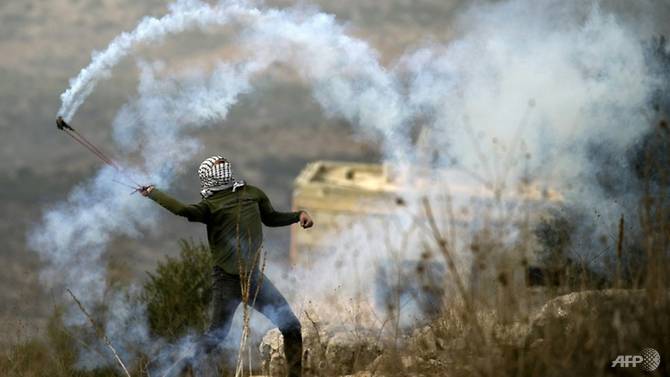 Palestinian protesters hold weekly demonstrations in the West Bank village of Kfar Qaddum against Israeli expropriation of their land to make way for homes for settlers. (Photo: AFP/Jaafar Ashtiyeh)
Share:

Palestinians living across the globe have voiced their outrage and opposition to the bombshell US announcement on Monday that it would no longer consider Israeli settlements in the occupied West Bank illegal, as they are considered under international law.

Many were quick to point out the Trump administration’s latest pro-Israel move does not change how the occupation is viewed internationally.

“No matter what the US says, Palestine is still occupied, settlements are still illegal and Palestinians continue to live under brutal Israeli occupation,” tweeted Diana Buttu, a Palestinian-Canadian lawyer and a former spokesperson for the Palestine Liberation Organisation (PLO).

Palestinian-American Congresswoman Rashida Tlaib also shared a similar sentiment: “Israel’s settlements in the West Bank violate international law. No matter what this corrupt and immoral Trump regime (yeah he is a lawless king-like dictator) [says], it doesn’t change that fact,” she tweeted.

Others addressed the bleak implications that Secretary of State Pompeo’s remarks mean for the future of the occupation, in other words, large-scale settlement expansion and annexation.

Israel's settlements in the West Bank violate international law. No matter what this corrupt and immoral Trump regime (yeah he is a lawless king-like dictator) say, it doesn't change that fact. #FreePalestine & #ImpeachmentTrumpNow

“This is another Trump gift to Netanyahu and a green light to Israeli leaders to put settlement building further into overdrive and advance formal annexation,” said Palestinian-American analyst Yousef Munayyer on Twitter.

Gaza-based activist Omar Ghraieb half-joked, half-lamented: “So the US decided to rewrite international law? What’s next? Rape becomes legal? The world should be scared.”

“We all saw this coming, not for years, but for decades. Each US administration has pandered to Israel on settlements and delivered the message that ‘might is right’,” tweeted Buttu.

“Making it about Trump is self-exculpatory and a continuation of violence. Trump is not the rupture, he’s the culmination of US policy,” she argued.

Some struck a more positive note, using the statement to galvanise resistance to the move and the occupation more widely.

“The reaction of the International community must be proportional to the danger of Trump decision,” tweeted Hebron-based activist Issa Amro. “We must go to the ICC, Ban the settlements from all countries, describe what is happening as a apartheid.””We should not give up,” he added.