Protests over fuel prices in Iran spread to several  cities 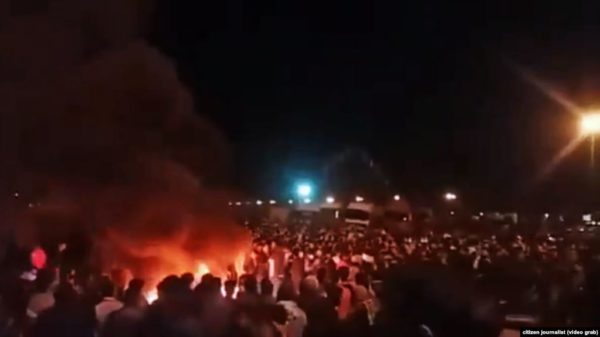 A video grab shows protest in the city of Sirjan in south Iran against the increase of gasoline prices. November 15, 2019
Share:

Protests against the unexpected increase in gasoline prices in Iran have spread into its second-largest city, Mashhad, in the northwest of the country.

The Islamic Republic’s decision yesterday, November 14, to rationing and up to a three-fold increase in the price of gasoline, almost immediately triggered a series of angry protests mainly in the cities of the oil-rich Khuzestan, southwest Iran.

Angry protesters in Ahvaz, the capital city of Khuzestan, as well as in Behbahan, Mahshahr, and Omidiyeh chanted slogans against President Hassan Rouhani and his administration.

A video received by Radio Farda from Ahvaz protests shows a tense situation.

Retaliating to Rouhani’s comment that the members of the lower classes of the society would benefit from the price increase, the protesters shouted, “Gasoline price increased, making the impoverished poorer.”

Meanwhile, the citizens of Ahvaz called upon each other to turn off the engines and stop buying gasoline.

Furthermore, the city of Gachsaran, in Kohgiluyeh and Boyer-Ahmad Province between Shiraz and Ahvaz, also was the scene of widespread protests.

Soon, the people of the city of Sirjan, in Iran’s largest province, Kerman, joined the protests and held rallies against the government decision. Based on footage circulated on social media, protests in Sirjan have led to violence. In one case, enraged citizens set fire to at least one gas station.

In Iran’s second-largest city, Mashhad, the capital city of the northwestern province of Khorasan Razavi, the theme of protest slogans was evidently more political and directly aimed at President Rouhani and other leaders of the Islamic Republic.

In late December 2017, Mashhad was the scene of an unprecedented anti-Islamic establishment protest that soon spread to more than one hundred cities across Iran.

The decision to increase the price of gasoline was taken by the heads of three powers of the government and announced by President Hassan Rouhani.

Earlier, Majles (Iranian parliament) had opposed the increase, arguing that it would lead to more pressure on the poor and to “uncontrollable” protests.