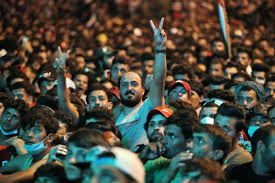 BAGHDAD  — Thousands of anti-government protesters in Iraq’s capital city celebrated with fireworks a 2-1 win over Iran in a much-anticipated World Cup qualifying match, hoping it would return momentum to their movement that has been hit by a deadly security crackdown.

Crowds watched the game Thursday on a large screen in Baghdad’s main Tahrir Square, the epicenter of demonstrations that have called for the overturning of Iraq’s sectarian system and Iranian political influence. Some carried Iraqi flags and chanted “Iran, out!”

Iraq had been due to play two home games in the southern city of Basra against Iran and Bahrain in November, but the oil-rich city has been caught up in the anti-government protests that have gripped Baghdad and the mainly Shiite southern provinces since Oct. 1.

But the international soccer federation, which had recently lifted a three-decade ban on Iraq to host international matches, requested an alternative venue for security reasons amid the unrest. The Iraqi football association chose Amman.

Fireworks streamed into the sky when Iraq’s national team scored its first goal 11 minutes into Thursday’s game. Jubilant protesters danced, beat drums and chanted after another goal, scored just minutes before the end of the match, gave Iraq the win.

“This victory will give us more motivation to implement our demands,” said Ammar Hassan, carrying an Iraqi flag.

Several protesters told The Associated Press they hoped the win over Iran would inspire higher turnout after a recent security crackdown caused demonstrator numbers to dwindle.

For many, the triumph over Iran was a powerful symbol of their movement, which has left over 320 dead and thousands wounded. Protesters have taken to the streets in the thousands outraged by perceptions of widespread corruption, lack of jobs, and poor delivery of basic services despite the country’s vast oil wealth.

“Our victory today is a victory against the killers among those groups that are affiliated with Iran,” said Ali al-Fareej, 20, an university student who joined the raucous celebrations over Iraq’s soccer win.

The protesters have so far rejected government proposals for economic and constitutional reforms and are calling on the entire political leadership to resign, including the Prime Minister Adel Abdul-Mahdi. They are also calling for an end to Iranian influence in Iraqi state affairs.

Iraqi authorities began clamping down on public demonstrations last week by pushing protesters back from three bridges spanning the Tigris River toward the fortified Green Zone.Many have also felt intimidated by cases of disappearances and arbitrary arrests and had stopped showing up to demonstrations, fearful of retaliation.

In the southern city of Nasiriyah, where protesters have been engaged in daily confrontations with security forces, protesters also set up a large screen in Haboub Square to watch the game.

“The victory by Iraq today is a thorn in the eye of Soleimani,” said Ali al-Iraqi, referring to the head of Iran’s elite Quds Force who is credited with overseeing relationships with Iranian-backed militias in Iraq and the region.

The U.S. Ambassador to Iraq, Mathew Tueller, also weighed in.

“The U.S. hopes for a friendly match with a victorious Iraq. As the Lions of Mesopotamia always say, we fight to win! Good luck, Iraq!” he posted on Twitter, referring to the Iraqi national team with their team name. He also posted a photo of himself wearing the Iraqi team’s uniform and an Iraqi flag around his neck.