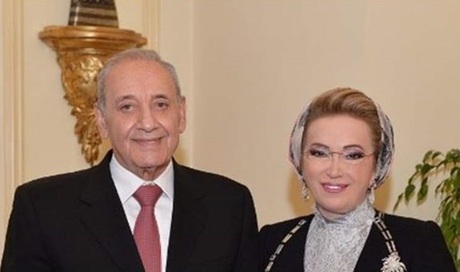 Parliament Speaker Nabih Berri and his wife Randa Assi Berri  claimed on Tuesday that they  lifted bank secrecy off their accounts inside and outside Lebanon, National News Agency reported.

NNA said Berri and his spouse signed memos lifting their bank secrecy during a meeting with the notary public Shadi Rammal.

The members of the Free Patriotic Movement parliamentary  bloc have recently made a similar move, amid unprecedented anti-corruption protests in the country.

Berri, 81, has been parliament speaker since 1992. He was reelected last year for a new four-year mandate. His critics accuse him of having abused his position to amass a colossal personal fortune and protesters have bashed him and his wife Randa as some of the most egregious examples of Lebanon’s patronage system.

One analysts told Ya Libnan ” as  soon as president Michel Aoun announced that bank secrecy  will be lifted off all the accounts of politicians, most of their accounts in Lebanon were emptied and wired to Swiss banks and tax haven countries.”   He added ” Aoun’s announcement was labeled as a password to the politicians.”

This may be the main reason why banks are  no longer allowing customers to withdraw funds in foreign currency.

So politicians have nothing to lose now in  rushing to make  such a  move.