Protests are continuing for the 23rd day, as demonstrators call for major changes to the political system.

As Lebanon faces its fourth week of demonstrations, protesters are taking a more targeted approach. In their crosshairs on Thursday was the nation’s central bank.

The country has been plagued by chronic shortages of cash. Many stand in long lines at ATM machines, only to find out the machines contain no money to withdraw. The situation has grown worse as demonstrations have forced bank closures.

“We are here to shut down the central bank because the bankers took all of our money from the country, and left us nothing,” one protester in Tripoli told FRANCE 24.

President Michel Aoun invited the central bank governor and the head and board members of the Association of Banks to a meeting Saturday  over the banking situation.

Association of Banks chief Salim Sfeir  reportedly told  MTV: Claims that a decision has been taken to close banks until the formation of the government are totally baseless and fabricated. This comes after reports circulated that the association  decided  to close all  the banks until a government was formed

The World Bank is urging Lebanon to form a new cabinet soon. It has called the risks to the country’s stability deeply concerning.

Ministry of education targeted on Thursday

Thousands of students took to the streets across Lebanon Thursday to demand a better future as an unprecedented anti-government protest movement entered its fourth week and continued to spread.

Waving Lebanese flags, students and high school pupils massed in front of the education ministry in Beirut to voice their grievances against a political class seen as corrupt and incompetent.

“I challenge any politician or official to send their children to state schools,” one pupil told a local television channel.

“The economy is in trouble, there is no work, how will we survive in the future?”

Groups of students gathered elsewhere in Beirut and in other cities, the latest boost to a mobilisation that has been relentless since the protests erupted on October 17. 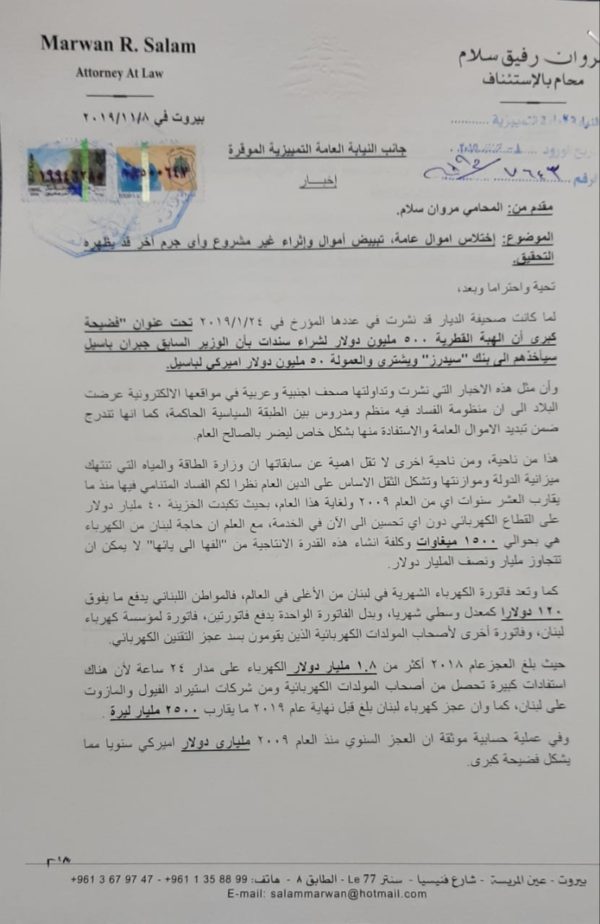 Lebanon protesters have been calling for the end of corruption.
In this connection Lawyer Marwan Salam announced on Friday that he filed a lawsuit against caretaker Minister Gebran Bassil accusing him of embezzlement of public funds, money laundering and illicit enrichment. Bassil heads up the Free patriotic Movement whose founder is president Aoun, Basil’s son-in-law.