From Iraq to Lebanon, Iran’s expansionist project is under siege 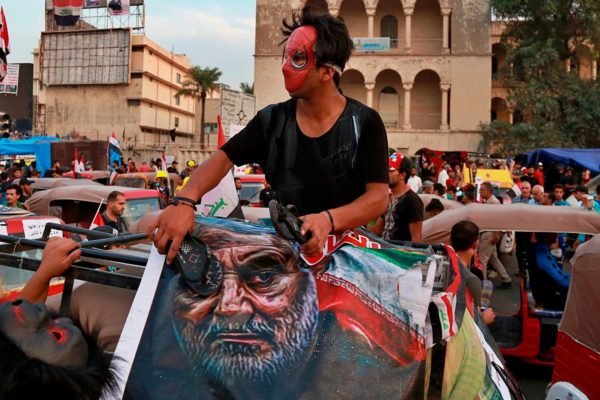 A protester uses a shoe to hit a poster showing Gen. Qassim Soleimani, leader of the Iranian Revolutionary Guard’s foreign wing, or Quds Force, during an antigovernment protest in Baghdad on Sunday. PHOTO: ASSOCIATED PRESS
Share:

Iran’s projects in Iraq, Lebanon, Syria and Yemen are coming under siege to such an extent that its leaders are in a state of panic. In Syria, the Iranian project has been set back by a Russian-approved US-Turkish deal, effectively blocking the strategic causeway Tehran was planning to complete its crescent of power, stretching all the way from Tehran to the Mediterranean via Iraq, Syria and Lebanon. In Iraq, there is a Shiite backlash against Iran’s excessive meddling in Iraq, to the point that protesters are chanting: “Iran get out”, despite a violent backlash from the IRGC-backed Popular Mobilisation Forces, who have fired live ammunition at protesters in Karbala, the consecrated heartland of Shiite religious doctrine.

In Lebanon, fear of Hezbollah has collapsed along with the unity government of accord it forms part of and Hezbollah chief Hassan Nasrallah is reduced to pointing the finger of blame. In Yemen, Iran’s expansionist project is facing a setback as the Saudi-Emirati exit strategy from the war is bearing fruit, giving Houthis a new path of belonging to a federalised Yemen, instead of looking towards Iran and its attempts at warmongering, with funds dwindling under US sanctions.

It is not clear what Iran will do under these circumstances but it faces some hard choices, especially if it insists on refusing to adjust and reform the regime’s expansionist logic. Perhaps the only thing Iran’s leaders can do now is to bet on US President Donald Trump not getting re-elected. This is now a distinct possibility. Mr Trump’s mercurial decision-making and disregard for US constitutional norms is wearing thin among Americans. However, even if Mr Trump is not re-elected, the US military and civilian establishment is pursuing a clear Iran policy based on military deterrence and maximum pressure through sanctions. This policy, which simultaneously seeks to avoid direct war with Iran, will remain in place unless Tehran or one of its proxies attacks US troops in the Middle East, triggering a military response, or exits the nuclear non-proliferation treaty, triggering an escalation in sanctions. This is a US doctrine, however, not Mr Trump’s.

General Kenneth McKenzie Jr, head of US Central Command (Centcom), last week addressed a conference held by the National Council for US-Arab relations. He said Iran remains a priority, but less so than China and Russia, in US strategic planning. He warned against false interpretations regarding the deployment and withdrawal of US troops in the Middle East and the Gulf, saying Iran continues to be monitored. And he spoke of deterrence “without provocation” as an important challenge to US calculations regarding Iran.

This means that the plans of some Iranian leaders attempting to lure the US into a military strike against Tehran have failed. Iran has only itself to blame for its crisis. Thanks to its regional expansionism, proxy warfare in sovereign countries and belligerent policies, it finds itself today besieged and heavily sanctioned, along with its extraterritorial militias. The Iranian regime’s logic is fundamentally flawed and unsuited to this time of a new, conscious generation.

This Generation Z is forging its future in Lebanon, away from Hezbollah’s dominion. They have been joined by the millennials, alongside their parents, the baby boomers. All have taken to the streets and are standing up to provocation. So far, they have thwarted the schemes of the corrupt class, who had, until now, been well versed in containing and frustrating such uprisings.

The young generation in Lebanon as well as in Iraq stand for victory against fear and blind obedience. They have risen up against corruption in their countries and against a political class that foolishly thought their power was permission to be greedy and venal. But this generation is also rising up against the 40-year-old presumption of the Iranian regime that it can dominate Arab youth through sectarianism, intimidation, oppression and Iranian-backed militias.

Hezbollah will not disappear tomorrow because of the uprising. Iraq’s Popular Mobilisation Forces will not agree to merge wholly with the Iraqi army after Iran prevented it from doing so. But these forces have been greatly weakened. They are facing the wrath of the same people they assumed would be their followers by default. The PMF will pay a heavy price for firing at Iraqi Shiite Muslims opposed to the militia’s allegiance to Iran, and for inviting the Islamic Revolutionary Guard Corps to help suppress the protests with force. Iraq’s revolutionaries are demanding an end to Iranian meddling in Iraqi affairs and its neighbour’s domination over its fate.

Lebanon’s revolutionaries, meanwhile, want Hezbollah to stop declaring its allegiance to the Iranian regime as its first priority. Theirs is not the country of the Iranian regime and never will be because its political structure and demographic composition cannot allow such deviation from its civil trajectory. The protesters demanded and succeeded in toppling the government of accord that Hezbollah had formed with Saad Hariri, the prime minister who resigned last week, and Michel Aoun, the president who installed his demagogical and provocative son-in-law Gebran Bassil as his viceroy.

Hezbollah might resort to spilling blood if the uprising against corruption and the ruling class continues. It might decide that a victorious revolution could mean removing it from power and ending its domination of Lebanon as well as its central position in the Iranian regional project.

But what would the Lebanese army do if a decision is taken to deploy loyalist thugs and turn the arenas of peaceful protests into a battlefront? Will the military stay on the fence or will it stand with the people?

So far, army chief General Joseph Aoun is reassured by his forces’ cohesion and conduct. There is no fear of the army splitting. Rather, it is Hezbollah’s ranks that could split. So far, the army has not begun repressing protests, which would be a fateful and costly decision. In this context, Mr Trump’s decision to withhold $105 million in military assistance to Lebanon should be seen as a warning against making wrong decisions.

The nations concerned for Lebanon are not rushing to rescue it from collapse as long as the beleaguered administration remains in power. They want the desired change to take place immediately, beginning with the formation of a technocratic government, without the usual deals. Mr Hariri’s resignation is the first step, but it must not be the only step. All parties poised to rescue Lebanon economically are ready to step in, as soon as they received a signal of intention to form a technocratic government, enact laws to punish corruption and hold new, fair and just elections.

Mr Hariri’s resignation was important because it met a basic demand of the revolution. However, it triggered concern in the Sunni community, which is worried the political class will settle for his resignation in return for guaranteeing his safety and perhaps returning him to head a technocratic government.

His stepping down did weaken the Hezbollah-Aoun alliance, a major achievement that must be built upon. This is a revolutionary trajectory, not just a one-off, and must be seen through to its conclusion.