Protesters in Nabatieh came under attack by local municipal police . Over 20 injured

The city of Nabatiyeh witnessed confrontation between the demonstrators and a number of young people who attacked them with sticks . 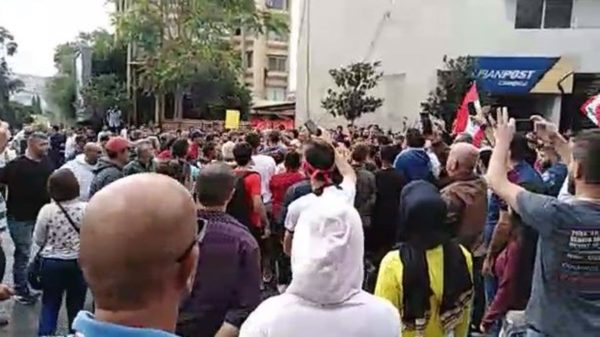 Over  20  were injuries in the   clashes

al-Jadeed TV reported    that the  attackers were  actually Municipal policemen who also  prevented TV reporters and cameramen from continuing coverage.

“Protesters in Nabatiyeh are urging the army to intervene after municipal police elements tried to disperse protest,” al-Jadeed TV reported.

Noting that army troops “did not intervene” to prevent the municipal police from assaulting protesters, al-Jadeed said the decision to disrupt  the demo was taken by “the leaderships of Hezbollah and the AMAL Movement in the region.”

For almost a week, the people of Lebanon have been staging an extraordinary revolt against their politicians.

Schools, universities and offices have been closed as hundreds of thousands of demonstrators have poured into Martyrs’ Square in central Beirut and other locations across the country to protest against those who have handsomely profited while steering Lebanon into an economic abyss.

The protests were triggered by a tax on WhatsApp voice calls that the government quickly ditched.

Nabatiyeh  is a stronghold of Hezbollah and Amal Movement . Hezbollah chief Hassan Nasrallah criticised the uprising and sided with the government in his televised speech 2 days after the uprising began