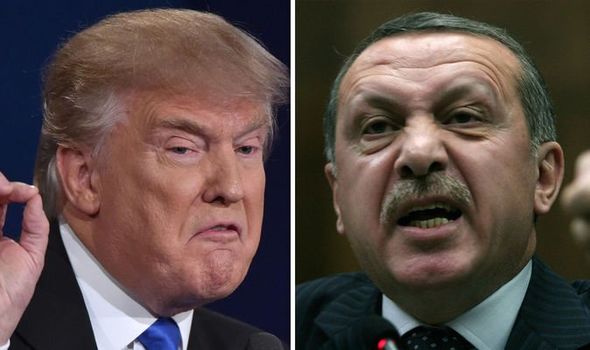 US President Donald Trump on Monday authorized sanctions on Turkey’s leaders, reimposed steel tariffs and ended talks on a trade deal, seeking to punish the historic ally for its deadly offensive into Syria.

Trump announced the measures as he came under intense pressure at home for appearing to at first give the green light to Turkish President Recep Tayyip Erdogan, who is seeking to crush US-backed Kurdish fighters in war-ravaged Syria.

“I am fully prepared to swiftly destroy Turkey’s economy if Turkish leaders continue down this dangerous and destructive path,” Trump, who until recently spoken of his friendship with Erdogan, said in a statement.

The president said he had issued an executive order to allow sanctions on sitting and former Turkish officials — although he has not yet imposed them — and was immediately ending talks on a US-Turkey trade deal he valued at $100 billion, a goal mentioned by Erdogan when he welcomed a US delegation last month.

Trump also said he was reimposing tariffs of 50 percent on Turkish steel — one of a series of measures taken last year to win the release of a detained US pastor, and which contributed to a plunge in the value of the country’s lira currency.

In May, Trump reduced tariffs back to 25 percent, in line with levels the protectionist-minded president has imposed on other trading partners including the European Union.

Signaling an escalating rift in relations, Defense Secretary Mark Esper said he would head next week to Brussels to ask NATO allies to punish Turkey over the incursion, which he said had “resulted in the release of many dangerous ISIS detainees.”

The Kurdish-led Syrian Democratic Forces were in the forefront of the campaign to defeat Islamic State extremists, but Erdogan links them to separatist militants within Turkey.

NATO has long been seen as keeping Turkey in the Western orbit, but Erdogan angered the United States earlier this year by buying the major S-400 missile defense system from Russia.

Trump had come under attack even within his Republican Party after withdrawing US troops who had served as an effective buffer against Turkish invasion.

Less than an hour before his statement, Trump was on Twitter defending his hands-off stance, saying that the fate of Syria’s Kurds was not the business of the United States.

“Anyone who wants to assist Syria in protecting the Kurds is good with me, whether it is Russia, China, or Napoleon Bonaparte. I hope they all do great, we are 7,000 miles away!” Trump wrote.

Turkey is expected to be high on the agenda when the US Congress returns to session on Tuesday.

They said they would ask Republicans to join them in passing a resolution calling on Trump to reverse the pullout of US forces.

“President Trump should use this moment to step up, do the right thing, and correct course,” top Senate Democrat Chuck Schumer wrote in a joint statement along with Bob Menendez and Jack Reed, the top Democrats on the Senate Foreign Relations and Armed Services committees.

House Speaker Nancy Pelosi earlier said she was forging ahead on a Turkey sanctions bill with Republican Senator Lindsey Graham, a normally loyal Trump ally who has been sharply critical of the pullout.

Trump confirmed he was pulling all troops out of northeastern Syria — a position he has favored for months and nearly carried out in December after a previous conversation with Erdogan.

He said that US troops would remain in the southern Syrian base of Al Tanf. A US official said around 150 Americans were at the base while 1,000 were leaving northeastern Syria.

Trump said that the withdrawn troops will “redeploy and remain in the region to monitor the situation” to prevent a resurgence of the Islamic State group, although he did not specify where.

The United States maintains thousands of troops in nearby Iraq and on Friday announced reinforcements to Saudi Arabia amid tensions between the oil-producing ally and Iran.

Trump again warned Turkey it was responsible for the safety of civilians and minorities, and eventually the detention of Islamic State extremists held by Kurdish fighters.

“I have been perfectly clear with President Erdogan: Turkey’s action is precipitating a humanitarian crisis and setting conditions for possible war crimes,” Trump said.