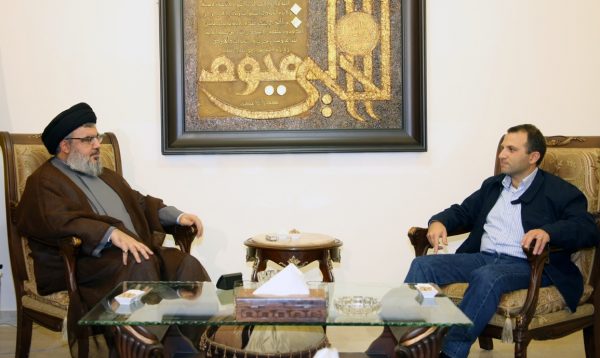 “Bassil’s remarks at the Arab League and at his speech marking the October 13 anniversary, clearly indicate he put himself at the disposal of Hezbollah leader   Sayyed Hassan Nasrallah, to blackmail other parties mainly PM Saad Hariri,” March 14 sources who spoke on condition of anonymity told the daily.

They said that Bassil seeks to become the next president of Lebanon, Bassil’s principle is “promise me the presidency otherwise I will turn the table over your heads,” they said.

Referring to the Minister’s rhetoric Sunday at the Free Patriotic Movement rally marking the party’s Oct. 13, 1990, anniversary, the sources said: “He opened fire at all political parties starting with Hariri, the Lebanese Forces and Progressive Socialist Party to say that he is the strongest and that he derives his strength from Hezbollah.”

At the Arab League, Bassil called for ending the suspension of Syria’s membership of the Arab League. His position was blasted by several   parties that oppose normalizing ties with the Syrian regime.

Marking the Oct. 13 anniversary, Bassil told an FPM rally Sunday that he plans to visit Syria to secure the return of Syrian refugees, but Minister  of Industry Wael Abu Faour accused  Bassil  during a rally on Monday of traveling to Syria to beg for the presidency

“Bassil is not going to Syria to return the refugees but rather to ‘beg for the presidency’ because “he has been told that the path to  the presidency goes through Damascus.”

October  13, 1990,  marks the day when the Syrian Army stormed Baabda Palace and other strongholds of  General  Michel Aoun, killing hundreds of Lebanese soldiers and civilians and ousting Aoun, marking the end of the Lebanese Civil War. Aoun fled to the French embassy in Beirut and lived in France in self exile until April 2005 after the Syrian army withdrew under pressure from Lebanon.

Like Bassil ,  Aoun is currently allied with Hezbollah and the Syrian regime

Last week, Hezbollah announced that Nasrallah and Bassil held a “lengthy” meeting and “agreed on the need to secure economic stability in the country.”