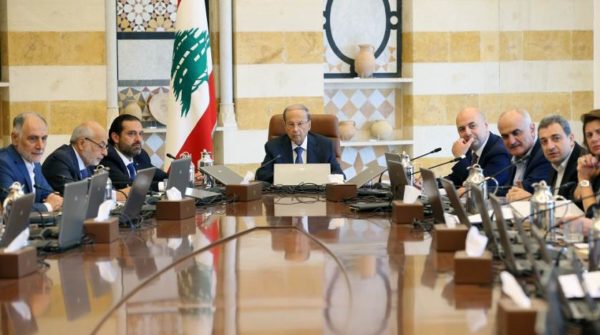 Lebanon’s cabinet met on Saturday for the first time since late June, a day after steps were taken to resolve a political dispute that had paralysed a government seeking to reduce massive public debt.

Information Minister Jamil al-Jarrah, speaking on television after the meeting, said an investigation into a shooting incident which sparked the crisis would continue and findings would be reported to the cabinet to decide how to proceed.

Two aides to a government minister were killed during June’s shooting, and the minister’s allies accused a rival political party of attempting to assassinate him.

That party said its supporters had been fired on first and that two of them were injured in the clash.

The dispute, pitting Lebanon’s two main Druze leaders against each other and embroiling other parties in the coalition government, focused on which court should hear the case.

Lebanon’s dollar bonds rose on Friday as it became clear that the Druze leaders would hold a reconciliation meeting and that a cabinet session might become possible.

With one of the world’s heaviest public debt burdens, equivalent to 150% of GDP, the government has made reducing the fiscal deficit and attracting foreign investment a priority since it was appointed in January.

A 2019 budget was approved, months late, in July, with big planned cuts to spending. Prime Minister Saad al-Hariri has said the government is committed to quickly agreeing a 2020 budget that includes further fiscal reforms.

Political disputes have derailed economic policy-making for long stretches of the past decade, a period also affected by the war in neighbouring Syria. Lebanon’s growth has slowed and its public debt has grown.

President Michel Aoun chaired the meeting in the presence of the Premier and ministers to tackle 61 items that were initially listed on the July 2 agenda that was postponed because of the deadly incidents in Qabrshmoun.

Aoun and Premier Saad Hariri held a closed meeting before the session.

The PSP and LDP were at loggerheads over said incident that left two guards of Gharib dead when his convoy was passing through Aley.

For his part, Gharib did not reply to the same question posed by reporters.

On Friday, Lebanon’s top leaders managed to secure a reconciliation between PSP leader Walid Jumblat and LDP chief Talal Arslan, ending weeks of political deadlock and tensions over the incident.