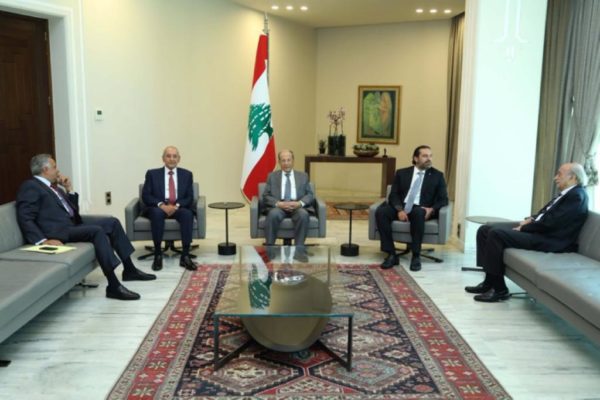 After years of refraining from directly meddling in Lebanese developments, the United States intervened directly on Wednesday to warn against any security deterioration in the country in wake of heightened tensions sparked by an armed clash on June 30.

In an unprecedented statement, the US embassy said Washington “supports fair and transparent judicial review without any political interference.”

“Any attempt to use the tragic June 30 event in Qabr Shamoun to advance political objectives should be rejected. The US has conveyed in clear terms to Lebanese authorities our expectation that they will handle this matter in a way that achieves justice without politically motivated inflammation of sectarian or communal tensions,” the statement added.

Contacts among political forces were promptly intensified, leading to reconciliation Friday between the rival Druze leaders, Walid Jumblatt, of the Progressive Socialist Party, and MP Talal Arslan, of the Lebanese Democratic Party.

Gharib declared the shooting incident an assassination attempt for which his allies held Jumblatt’s party responsible.

The clash led to the obstruction of cabinet sessions for five weeks given the severe political divisions that swept the country.

Cabinet was set to convene on Saturday.

The US embassy statement, the most significant comment on Lebanese internal affairs since 2005, means that Washington views Lebanon as a country of interest that figures into regional and international plans. Observers interpreted the statement as “decisive intervention to maintain the stability and the current status quo” that has indeed helped return affairs on the right path.

The statement reflected the US keenness on boosting Lebanon’s stability and preventing any security and economic deterioration. These are issues Washington has long been in support of, but the statement marked the beginning of a new phase in which the US sponsors Lebanon’s political stability.

Embassy statements rarely ever commented directly on a local crisis or affair, but were restricted to hailing elections or the formation of a government or voicing support to the army in combating terrorism and preserving stability.

An observer told Asharq Al-Awsat that Wednesday’s statement was prompted by “serious fears” that institutional life could be obstructed in Lebanon.

The Qabr Shamoun clash took on a political turn when Foreign Minister Jebran Bassil, backed by Hezbollah, sought to exploit the development to eliminate or marginalize Jumblatt and the Lebanese Forces from politics. He was confronted by Speaker Nabih Berri and Prime Minister Saad Hariri. The incident took on a more dangerous turn when the PSP accused figures close to President Michel Aoun, who is Bassil’s father-in-law, of fabricating a judicial file to eliminate Jumblatt.

Lokman Slim, a political activist and co-director at UMAM Documentation and Research, told Asharq Al-Awsat that the US embassy statement was an attempt to find a solution to the crisis.

Washington is primarily concerned with preserving stability and the statement sought to contain the crisis and prevent it from spreading even further in the country, he explained.

Former Lebanese Ambassador to Washington, Riyad Tabbarah told Asharq Al-Awsat: “Lebanon’s security and economy is being protected by the international community. It is in no one’s interest, neither the US, nor Europe, nor even Iran, to see it destabilized. The US often spearheads stabilization efforts.”

“It does not meddle in every single aspect of Lebanese affairs unless the situation was spiraling out of control, which is what forced its last intervention,” he noted.

He revealed that the US ambassador in Lebanon had held talks with numerous Lebanese officials to warn them that it was “unacceptable” for the situation to escalate, but her calls were left unheeded, prompting the embassy to make its statement and warn against sectarian clashes.

Tabbarah predicted that Washington was prepared to resort to “firm measures to protect stability.”

Wednesday’s statement was preceded by three precedents that pushed Washington to directly intervene in Lebanese affairs when the situation was getting out of hand.

Each phase had its own circumstances, said Tabbarah. In 1958, American forces made an aerial landing on Lebanese shores. In 1983, American, along with Italian and French, forces intervened in the country when it appeared to be on the verge of being usurped by foreign powers. The Americans and French were later targeted by a bombing.

The third intervention took place when Syrian forces refused to withdraw from Lebanon in the early 21st century, prompting the issuing of United Nations Security Council resolution 1559 in 2004. This was followed by Washington’s support for the March 14 revolution that led to the withdrawal of Syria from Lebanon.

Observers believe the American meddling on Wednesday was prompted by a number of priorities. They include the offshore oil and gas reserves in Lebanon, security along the Lebanese-Israeli border, keeping Lebanon away from the Syrian crisis, containing the Iranian expansion and supporting the Lebanese military.

Tabbarah, however, said that these issues are “trivial”, despite their importance, because Washington’s “absolute priority” is containing tensions in Lebanon to avoid the eruption of a civil war.

Any security instability could undermine the above-mentioned priorities, he said.

Furthermore, no power has an interest in seeing security deteriorate in Lebanon, neither the US nor Iran, despite the differences between them, Tabbarah remarked. The US is keen on preserving Lebanon’s security because that in turn will preserve Israel’s security, Iran wants security in Lebanon because it does not want to squander the billions of dollars it spent on Hezbollah for a potential war with Israel to be wasted on civil war in Lebanon.

Divisions over the embassy statement

Hezbollah had strongly condemned the embassy statement as “flagrant” meddling in Lebanese internal affairs. It slammed it as a violation against the Lebanese state and its constitutional and judicial institutions.

Aide to Hariri, MP Ammar Houri, warned against underestimating the situation in Lebanon, saying the embassy statement highlighted “dangers we may confront.” He noted Lebanon was at a critical economic crossroads and was seeking to invest in the CEDRE conference decisions.

Lebanon must, therefore, maintain good relations with countries, he said.