Hundreds arrested in Moscow as protests pile pressure on Putin 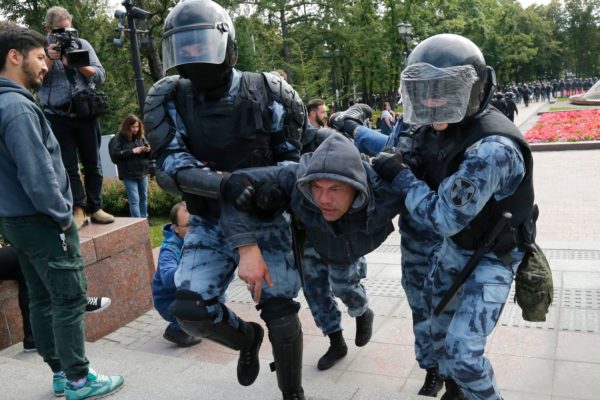 Police officers detain a protester during an unsanctioned rally in the center of Moscow on Saturday. PHOTO: ALEXANDER ZEMLIANICHENKO/ASSOCIATED PRESS
Share:

MOSCOW—Police detained more than 600 people at an unauthorized protest in the Russian capital demanding fair elections, as a recent wave of public discontent in Russia showed few signs of abating.

The rallies, protesting the exclusion of opposition candidates from local elections, came a week after more than 1,300 people were detained and dozens injured in similar demonstrations.

The mass protests, which began in Moscow in mid-July, are some of the most significant displays of public dissatisfaction in Russia since President Vladimir Putin returned to the Kremlin in 2012. The rallies, which follow demonstrations on various issues across the country in the past year, come as Mr. Putin’s approval rating has fallen to multiyear lows.

The ministry put the number of participants at 1,500, though independent media reported higher figures.

More than a thousand people protested at a similar rally in St. Petersburg, which was authorized by city officials.

Among those detained on Saturday was Lyubov Sobol, a female protest leader who has been on a hunger strike for the past three weeks.

By late evening in Moscow, some of those detained were released, similar to the previous protest. Many protest leaders, though, have been in jail since last week, with sentences up to 30 days. Investigators have also opened a criminal probe investigating those organizing mass civil unrest, which carries a penalty of up to 15 years in jail.

There was no immediate response from the group to the allegations, but on Friday, Leonid Volkov, a close aide of Mr. Navalny, responded to speculation that such an investigation was imminent saying on Facebook that the allegations were baseless and accusing the authorities of trying to destroy the organization’s network.

An outspoken Kremlin critic, Mr. Navalny is currently serving 30 days behind bars for organizing unauthorized protests. Last weekend he was hospitalized with what he and his team suspect was poisoning, though officials have said his toxicology tests showed no trace of poison.

The protests, the largest of which saw crowds exceeding 20,000 people earlier this month, were sparked by a decision by Moscow’s electoral commission to bar opposition candidates it says failed to collect enough signatures to be placed on the Sept. 8 city council ballot. The candidates say they had the required support.

The 45-member Moscow city council is currently controlled by the pro-Putin United Russia party, and gaining seats there would be a significant victory for the opposition.

The protests could rattle the Kremlin, following a wave of discontent in the past year. Russians have taken to the streets across the country to protest against a rise in the retirement age, the creation of landfill in rural areas and tightening control over internet freedoms.

Mr. Putin’s approval rating fell to 64% in January, according to the independent Levada Center, its lowest level since 2013. The rating inched up to 68% in July, still a far cry from its 2015 highs of nearly 90%.

The Kremlin and senior government officials have remained silent on the protests. Moscow Mayor Sergei Sobyanin, an ally of Mr. Putin, praised the police response to last weekend’s rallies.

Protesters on Saturday met at various points along the 2.5 mile-long Boulevard Ring that circles central Moscow, a city of more than 12.5 million people.

Many shops in central Moscow were closed in anticipation of the rallies, called “A walk along the boulevards,” and police had cordoned off main thoroughfares.