. US accuses Iran of attacking 2 oil tankers in Gulf of Oman 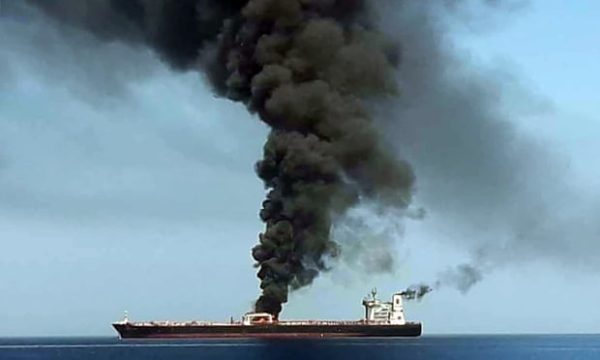 A grab from Iranian state TV that it says shows smoke billowing from one of two tankers that sent out distress calls in the Gulf of Oman on Thursday. Photograph: HO/AFP/Getty Images
Share:

Two oil tankers have been hit in suspected attacks in the Gulf of Oman and the crews evacuated, a month after a similar incident in which four tankers in the region were struck.

The US navy’s fifth fleet said it was assisting the tankers, which issued distress calls near the strategic Strait of Hormuz.

Reports of the explosions originally came from the same Hezbollah-linked news agencies in Lebanon that correctly reported attacks on tankers docked off the coast of the UAE in May. The US blamed those attacks on Iran – an accusation Tehran has denied.

The suspected attacks occurred in one of the world’s busiest oil routes, and the price of oil surged as the initial reports emerged.

Front Altair was carrying 75,000 tonnes of naphtha, a petrochemical feedstock, when it was “suspected of being hit by a torpedo”, said Wu I-Fang from Taiwan’s state oil refiner CPC, which chartered the tanker. Iran state media reported that the Front Altair had sunk, though the ship’s operator, Frontline, said this was not the case.

The Kokuka Courageous was damaged in a “suspected attack” that breached the hull above the water line while on passage from Saudi Arabia to Singapore, Bernhard Schulte Shipmanagement said. “The ship is safely afloat,” it added.

Iranian state TV reported 44 crew had been evacuated from the tankers to an Iranian port.

United Kingdom Maritime Trade Operations, part of the Royal Navy, said it was investigating. “We are deeply concerned by reports of explosions and fires on vessels in the Strait of Hormuz. We are in contact with local authorities and partners in the region,” a British government spokeswoman said.

Gulf tensions have been close to boiling point for weeks as the US puts “maximum economic pressure” on Tehran in an attempt to force it to reopen talks about the 2015 nuclear deal, which the US pulled out of last year.

The latest incident came as the Japanese prime minister, Shinzō Abe, held talks with the Iranian leadership in Tehran in a bid to find a basis for discussions between the US and Iran. The Japanese stressed they were not bringing specific messages from the US president, Donald Trump, and said nothing that they had heard in the first day of talks suggested a breakthrough was imminent.

The Iranian foreign minister Mohammad Javad Zarif described Thursday’s developments as “suspicious” and implied that the fault lay with a person or group trying to damage Iran.

“Suspicious doesn’t begin to describe what likely transpired this morning,” he tweeted, adding that the incidents took place while Abe was meeting Iran’s supreme leader Ayatollah Khamenei “for extensive and friendly talks”.

An inquiry by the UAE into the attacks on 12 May found the sophisticated mines were used by state-like actors, but did not identify Iran or any other state as the culprit. The US national security adviser, John Bolton, said Iran was almost certainly involved. An alternative explanation is that the attacks were undertaken by Houthi rebels fighting the Saudi-led efforts to oust them from Yemen.

Iran has repeatedly said it had no knowledge of the attacks and had not instructed any surrogate forces to attack Gulf shipping, or Saudi oil installations

In a sign of how the Yemen civil war and the wider US-Iranian tensions are becoming intertwined, Riyadh accused Tehran of ordering a Yemeni rebel missile strike that wounded 26 people at a Saudi airport on Wednesday.

“The continuation of the Iranian regime’s aggression and reckless escalation, whether directly or through its militias, will result in grave consequences,” Saudi Arabia’s deputy defence minister, Prince Khalid bin Salman, said.

Iran and the Yemeni rebels both follow branches of the Shia sect of Islam but Tehran has always denied providing more than moral support to the rebels.

The rebels say missile and drone strikes against Saudi Arabia are one of the few ways they can retaliate after more than four years of bombing by the Saudi-led coalition, which has exacted a heavy civilian death toll in Yemen.