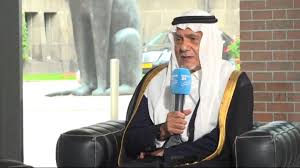 The former head of Saudi intelligence, Prince Turki al-Faisal, granted an interview to FRANCE 24 in The Hague. Prince Turki said he was pessimistic about the prospects for a successful negotiation between the US and Iran, calling Iran “a disruptive force” in the region. He also accused Tehran of being behind this week’s attack by Houthi rebels on an airport in Saudi Arabia. On the war in Yemen, he said he saw no chance for a peaceful solution in the near future.

“I’m always hopeful that sensibility can be achieved in the minds of [the] Iranian leadership. However, from their past practice and how they have continued to be a disruptive force in the area, it’s difficult to be optimistic about their actions,” former Saudi intelligence chief Prince Turki al-Faisal told FRANCE 24’s Marc Perelman.

Turning to the Middle East peace process, Prince Turki said he was waiting for US President Donald Trump to unveil his much-touted “deal of the century” between Israel and the Palestinians. He also denied that the Saudis had abandoned their support for core Palestinian demands in exchange for a rapprochement with Israel.

On the issue of relations with Qatar, Prince Turki lamented that he had seen “no change” in the Qatari position, two years after a Saudi-led coalition imposed an embargo on the country.

Finally, he insisted that the murder of Saudi journalist Jamal Khashoggi was carried out by “rogue elements” and forcefully denied claims that Crown Prince Mohammed bin Salman ordered the killing.