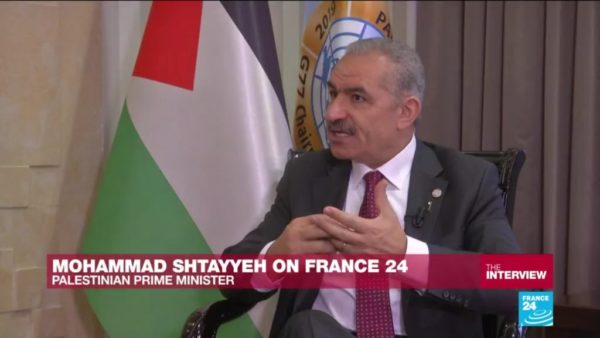 In an exclusive interview with FRANCE 24, Palestinian Prime Minister Mohammad Shtayyeh criticised Washington’s decision to convene an economic conference on the Palestinian issue next month in Bahrain, saying Trump is “waging a financial war against the Palestinians”.

Palestinian Prime Minister Mohammad Shtayyeh said Trump is “waging a financial war” and argued there could be no economic progress without a political solution.

Shtayyeh declined to say whether Arab countries such as Saudi Arabia and the UAE, which have agreed to attend the US-led conference, were betraying the Palestinians, saying he understood they were under US pressure.

While Trump has not yet announced a peace plan, decisions by the US administration in recent months already indicate that a Trump proposal would not meet Palestinian demands, he said. Shtayyeh noted that Palestinian Authority leader Mahmoud Abbas has had some promising talks with Trump but that the outcome was a “disaster”.

Shtayyeh urged Europe to give more financial support to the Palestinians and urged France to recognise Palestine as a state. He said Israeli Prime Minister Benjamin Netanyahu could “never” be a partner for peace and said he was ready to go to Gaza “tomorrow” to seal a reconciliation deal with Hamas.