Steve Bannon is hurting more than helping Le Pen ahead of EU vote. Shows his ignorance of EU 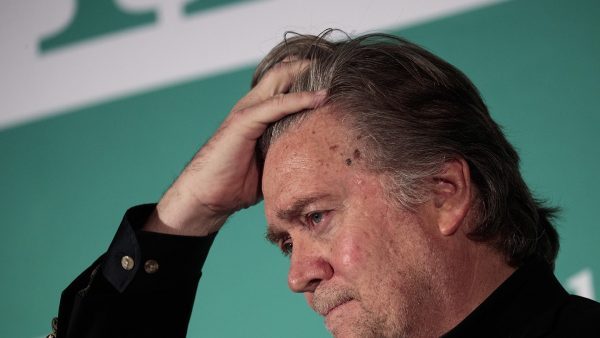 The European elections slated for Sunday quickly became a two-horse race in France, an echo of the final duel of the May 2017 French presidential vote. That battle pit Europhile centrist Emmanuel Macron against far-right Eurosceptic Marine Le Pen, who ultimately stumbled to defeat after a rough campaign, to Brussels’ visible relief.

Since winning Elysée Palace, Macron has worn his ambitions for a strong Europe on his sleeve. But he has also faltered at home amid the pavement-pounding persistence of the anti-elite Yellow Vest movement. Le Pen, meanwhile, rebranded her rabble-rousing father’s National Front as the National Rally – inviting no lesser light than the President of the United States’ one-time right-hand-man, Steve Bannon, as a guest of honour for the showy launch in March 2018 — and has sought to capitalise on the angry zeitgeist.

Flash forward to these European elections and the French president is facing the real prospect of finishing second to the far-right populist force, led by 23-year-old campaign flagbearer Jordan Bardella under Le Pen’s watchful eye. Polls place the National Rally and Renaissance, the banner championed by Macron’s La République en Marche party, neck and neck with more than 20 percent of voter support each, well ahead of a crowded peloton. Voters in France will cast ballots on Sunday for one of 34 domestic party lists, with each faction’s vote determining how many MEPs, if any, each will send to the European Parliament.

With just days to go before that ballot, the EU’s motley collection of nationalists, Eurosceptics and populist right-wingers are poised to improve their lot in the 2019-2024 chamber. Nearly a dozen such leaders, including Le Pen, joined forces for a rally in Milan on Saturday hosted by Italy’s League leader Matteo Salvini.

From his 8000€ the night Hotel Bristol in Paris, Steve Bannon shows his crass ignorance of the EU and his dangerous liaison with the LePen gang. In @leJDD today. pic.twitter.com/WjuK1NwT3E

European credibility on the line

Macron’s forces, meanwhile, have struggled with former European Affairs minister Nathalie Loiseau, untested as a politician, at their campaign’s helm. Tagged as technocratic, short on charisma and gaffe-prone, Loiseau was even left off Renaissance campaign posters last week, in favour of Macron, as the French president rolled up his sleeves to get involved in the race down the stretch. The move is an unusual one, but a second-place finish to Eurosceptics in France would be an embarrassment for Macron and compromise his European aspirations.

The American eminence grise has made a sideline of aiding populist forces all across Europe in their bid for power for more than a year in the run-up to this month’s elections. Bannon set down his bags in Paris this weekend at the Bristol, a luxury hotel steps from the Elysée Palace. He received French media for interviews in a lavish suite, praising Marine Le Pen’s resilience and championing her chances for glory at the ballot box. The Journal du Dimanche, one of the newspapers to interview Bannon there, noted “each of his nights during this week in Paris in one of the Bristol Hotel’s most beautiful suites costs €8,000, six times a minimum-wage earners’ net income”. The paper took notice of the so-called palace’s proximity to the Champs Elysées, “where so many shop fronts were smashed” by Yellow Vest protesters, leaving the contradiction to suggestion.

In an interview Bannon gave to Le Parisien from his room, he reprised nearly word for word his praise for Le Pen’s thinking at her party’s 2018 convention in Lille, likening the nation state to a precious gem. The political divide between left and right is no longer pertinent, he said then and now. What matters today is whether “you consider the nation state as an obstacle to be overcome or as a jewel to be polished, loved and nurtured”, he’d told the rapt crowd in Lille.

Indeed, amid the spectacle of Brexit, Le Pen’s party has dropped its pledge to extract France from the EU and the euro currency, instead proposing rolling back the bloc’s federalist pretenses from the inside and advocating for little more than a club of independent nations.

Macron, for his part, calls Sunday’s European vote the most important since the European Parliament first held direct elections in 1979 “because the Union faces an existential risk”. His camp paints the European project, perhaps paradoxically, as the best way to retain sovereignty amid the lurking hegemonies beyond EU borders.

“Behind the nationalists… there is submission to foreign forces, submission of the French nation,” Finance Minister Bruno Le Maire told BFM TV over the weekend. “Fundamentally, there is real capitulation. The nationalists have given up on the European continent being independent and sovereign in the face of China and the United States.”

With Bannon ensconced at the Bristol, centrists saw their opening. Treating the foreigner like a walking illustration of a hypocrisy they might not otherwise have articulated so well, Renaissance reps highlighted the irony in domestic nationalists allying with foreign nationalists who may harbour conflicting objectives.

“The new far-right international… is materialising to destroy the European Union, and today the National Front [National Rally] is the useful idiot in that political programme; it’s Trump’s and Putin’s Trojan Horse,” Pascal Canfin, number two on the Renaissance list, said Sunday.

And just last week, after French television aired a report showing footage of National Rally heavyweights — including party number two (and Le Pen companion) Louis Aliot — meeting with Bannon in London to discuss party financing, a cross-party clutch of French lawmakers demanded an inquiry. The footage was from Alison Klayman’s behind-the-scenes Bannon documentary “The Brink”, which notably highlights the frequent contact between the American former banker and National Rally executives.

Macron didn’t waste an opportunity to spotlight Bannon, either. “I see for the first time complicity between nationalists and foreign interests, for whom the objective is the dismantling of Europe. Lobbyists like Mr. Bannon, who is close to the American powers that be, say so,” he told French media on Monday. “The Russians and a few others have never been so intrusive in financing, helping extremist parties. We can only be disturbed. We mustn’t be naïve.”

“Who today is trying to divide Europe or weaken it? Precisely those who have an interest in doing so. To the East. Or to the West,” French Prime Minister Edouard Philippe said Monday, alluding to Russia and the US. “Mr. Bannon comes to Europe, to France, to say how much of an interest there is for him and for President Trump for us to change Europe’s scope and the values that enabled us to build Europe,” Philippe added.

In effect, Bannon’s highly remarked-upon visit put Le Pen and her party on the back foot, scrambling to distance itself from the meddlesome visitor.

“The National Rally has not asked [Bannon] for anything,” Nicolas Bay, a party MEP, told France Inter radio on Sunday. “We led this campaign in a perfectly independent manner without any foreign influence,” Bay said.

And as Bannon’s controversial visit continued on Monday, Le Pen told franceinfo she only learned about his visit through the media. She said the former Donald Trump aide had “no role in the [RN] campaign” and said she last met with him three months ago. “He is in Paris for business because he is in the process of selling one of his companies to a big French bank, so it has strictly nothing to do with the campaign,” Le Pen said. Bannon, meanwhile, was singing Le Pen’s praises, simultaneously on another channel.

Le Pen’s remarks struck a sharp contrast to Bannon’s own stated reasons for visiting the French capital. He told Le Parisien that he came to Paris “because, of all the elections that will take place next weekend in Europe, including in the UK with Nigel Farage and his Brexit Party, the most important one by far is here in France. Without a doubt.” Asked why he didn’t attend Salvini’s populist confab in Milan on Saturday, Bannon replied, “I wanted to go, but given how things are going in France, I’ll be more useful here where I will give interviews in the media to talk about the RN.”

The party in question doesn’t seem to feel the same. And the discrepancy wasn’t lost on observers. “RN executives’ very annoyed reaction over the turn Bannon’s interference has taken shows that they do perceive the gap between calling oneself nationalists of a middle power and being seen to be chaperoned by a nationalist from a foreign superpower at precisely the moment it is proclaiming ‘America First’,” France Inter radio editorialist Thomas Legrand opined on Tuesday.

Indeed, during his talk-of-the-town stay in Paris, Bannon also provided insight into his larger mission — for the nation state that retains his loyalty, after all. “My theory is that political ideas move like capital markets. That’s why I spend so much time in Europe,” he told Le Parisien. “Trump wouldn’t have been elected president without Brexit. It gives an impetus. If populists score higher than 30 percent in the European elections, it will provide that impetus that will help Trump for the 2020 campaign.”