Head of Venezuela’s secret police breaks with Maduro, calls for rebuilding the country 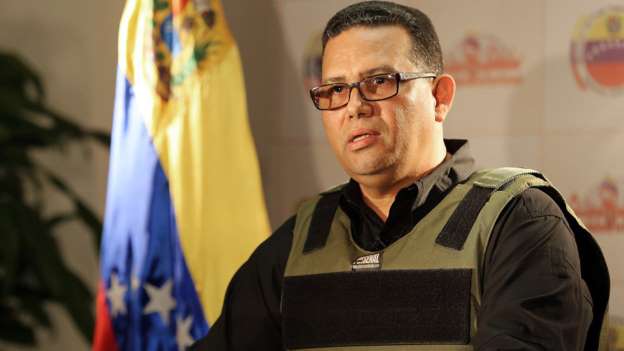 Manuel Ricardo Cristopher Figuera, the head of Venezuela’s feared secret police has turned his back on disputed President Nicolas Maduro in an open letter made public Tuesday night
Share:

The head of Venezuela’s feared secret police has turned his back on disputed President Nicolas Maduro in an open letter made public Tuesday night.

Meanwhile, Maduro took to Venezuela’s airwaves to proclaim that the uprising sparked by opposition leader Juan Guaidó had been defeated. In a rambling address, Maduro said his regime had responded to the rebellion with “nerves of steel, maximum serenity and effective action” and claimed that the leaders of the uprising were under arrest and being questioned.

“This cannot go unpunished,” said Maduro, who added that “all of those involved must surrender.”

Manuel Ricardo Cristopher Figuera, the head of the Bolivarian Intelligence Service (SEBIN), is the highest-ranking member of the country’s security forces to break with Maduro since Guaidó called for a military uprising Tuesday morning.

In the letter, the authenticity of which was confirmed to The Associated Press by a U.S. official, Figuera wrote that while he always had been loyal to Maduro, “the time has come to seek new ways of doing politics” to try and “rebuild the country.” The letter did not mention Guaidó by name but did say that Venezuela has experienced a damaging decline.

Earlier Tuesday, National Security Adviser John Bolton said the Trump administration was waiting for three key officials — Maduro’s defense minister, the chief judge of the supreme court and the commander of Maduro’s presidential guard — to act on what he said were private pledges to remove the beleaguered Venezuelan leader.

“All agreed that Maduro had to go. They need to be able to act this afternoon, or this evening, to help bring other military forces to the side of the interim president,” Bolton said. “If this effort fails, [Venezuela] will sink into a dictatorship from which there are very few possible alternatives.”

The defense minister, Vladimir Padrino López, publicly condemned Guaidó’s move Tuesday as a “terrorist” act and “coup attempt” that was bound to fail.

“Those who try to take Miraflores with violence will be met with violence,” he said on national television, referring to the presidential palace where hundreds of government supporters, some of them brandishing firearms, had gathered in response to a call to defend Maduro.

Guaidó has said that in the coming hours he would release a list of top commanders supporting the uprising.

“The armed forces have taken the right decision,” said Guaidó. “With the support of the Venezuelan people and the backing of our constitution they are on the right side of history.”

Anti-government demonstrators gathered in several other cities, although there were no reports that Guaidó’s supporters had taken control of any military installations.

The SIBE was responsible for holding Leopoldo Lopez, Venezuela’s most prominent anti-Maduro activist, in custody since his arrest in 2014. Lopez appeared alongside Guaidó, his political protege, Tuesday and claimed that he had been released from house arrest by security forces adhering to an order from Guaidó.

It was not immediately clear what role, if any, Figuera had played in Lopez’s release.