Egypt’s era of hope has ended

Eight years ago, Egypt was the beacon of hope for the Arab world. Now it is a cautionary tale. Protesters in Sudan and Algeria have learned to distrust the promises made by their militaries, because so many of those made in Cairo have since been broken.

Abdel Fattah el-Sisi, the defense minister that ousted the country’s first elected president in a popularly supported coup in 2013, once promised to stick to the two four-year terms mandated in Egypt’s young constitution. But, like so many strongmen before him, he has sought to circumvent that limit and has now been granted a third.
On Tuesday, the country’s election authorities announced that Egyptians had voted to pass a number of major changes to the country’s constitution in a three-day referendum, with 88.83% voting in favor of tightening its strongman leader’s grip on power.
Terms have also been extended to six years, meaning Sisi could rule until 2030.
President Sisi has presented himself as the solution to all of Egypt’s woes, including conspiracies by unnamed “forces of evil” that he often warns against. “God created me like a doctor who can make a diagnosis. This is God’s blessing. I know the truth and I see it … now the world listens to me,” he said in 2015.
Following the announcement of the referendum results, he praised Egyptians for a level of awareness “that dazzled the world,” and for their “genius” decision to participate in the referendum, “which will be proudly recorded in the nation’s history.” 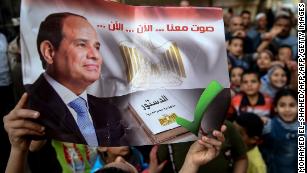 Since taking office, he has imprisoned almost all of his potential rivals, including the country’s former military chief of staff. He has expanded his powers over monitoring bodies, and his security agencies have crushed political dissent. Most opposing voices are now in prison, under strict probation, in exile, missing, or dead. Hundreds of websites are blocked in Egypt, including that of the campaign for a “no” vote in this constitutional referendum.
There is an inescapable sense that this chapter in Egypt’s history, which opened with such hope, has now come to the worst of ends.
The beginning of the end was written in 2013, when security forces killed around 1,000 peopleas they cleared Muslim Brotherhood sit-in sites in Cairo. The ensuing crackdown — and the resulting wave of terrorism that killed hundreds of soldiers and civilians — thrust the country into a cycle of violence it is yet to recover from.
An iron-fisted security policy has been Sisi’s answer to every challenge — even to the slightest display of discontent by the poor that have been left reeling under austerity measures. Some observers praise Sisi for implementing tough policies that could eventually fix the economy. But mega projects that drained resources with little immediate return — along with the unchecked expansion of military businesses at the expense of the private sector — have added to the list of near-term challenges.
Chances of democracy and of dignified life for all have diminished with every forced disappearance, sectarian attack, or crackdown on LGBT communities and those of divergent social and religious convictions.
The security agencies have such a tight grip that Sisi has felt no threat from the protests that have forced out his Algerian and Sudanese counterparts, and has forged ahead unflinchingly with his referendum.
And it is done with the blessing of a much changed international community, one that now favors such strongmen. The amendments were rushed to a referendum following Sisi’s visit to see US President Donald Trump, who was full of praise for his leadership. Gone are the days when democratic pretenses were required of autocrats to save face.
For those who believed in Egypt’s revolution and the ideals they rallied around, the past six years are full of personal and collective moments of defeat.
In the history books, these constitutional amendments will be noted as the end of the era that began with such belief. Not only as they give Sisi the ability to stay in power for another 11 years — and maybe longer — but because the control he will get over the judiciary and the legislative branches of government will do damage to Egypt’s political life that will outlive him and his rule.
While constitutions can be rewritten — this is Egypt’s fourth such referendum in eight years — throwing off the shackles of a security state like this one is a challenge so daunting that it will mandate a new chapter entirely.
(CNN)
Share:
Share Tweet Pin It +1
This error message is only visible to WordPress admins