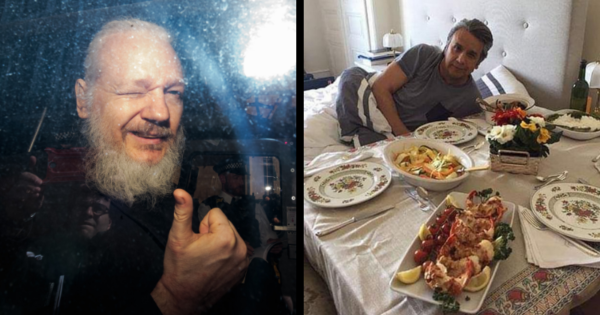 Was Julian Assange expelled from the embassy over a leaked picture of a lobster? An embarrassing photo of Ecuadorian President Lenin Moreno lying in bed enjoying a plate of lobster emerged online
Share:

QUITO, Ecuador — The dramatic end to Julian Assange’s asylum has sparked curiosity about his seven-year stay inside Ecuador’s Embassy in London that was marked by his late-night skateboarding, the physical harassment of his caretakers and even the smearing of his own fecal matter on the walls of the diplomatic mission.

It would’ve tested the patience of any host. But for tiny Ecuador, which prides itself on its hospitality and spent almost $1 million a year protecting Assange, it was also seen as a national insult.

“We’ve ended the asylum of this spoiled brat,” a visibly flustered President Lenin Moreno said Thursday in a fiery speech explaining his decision to withdraw protection of Assange and hand him over to British police. “From now on we’ll be more careful in giving asylum to people who are really worth it, and not miserable hackers whose only goal is to destabilize governments.”

Others, including former Ecuadorian President Rafael Correa, who granted Assange asylum in 2012, said that while Assange violated the terms of his asylum and was a burden on Ecuador “that’s no excuse for throwing him to the lions.”

Ecuador emerged as a haven for the WikiLeaks founder in 2012 as his legal options to evade extradition to Sweden over sex crime accusations dried up in the United Kingdom. On a June day, he moved into the country’s embassy near the upscale Harrods department store for what most thought would be a short stay.

Instead, the cramped quarters, where a small office was converted into a bedroom, became a permanent address that some likened to a de facto jail.

As the asylum dragged on, his relations with his hosts soured and his behavior became more erratic. Embassy staff complained of him skateboarding at night, playing loud music and walking around in his underwear with no apparent concern for others in the tiny embassy.

One senior Ecuadorian official described his room as a “sovereign territory within a sovereign territory” that none of the staff at No. 3 Hans Crescent could enter. But the stench from going weeks without a shower, and dental problem born of poor hygiene, was a constant nuisance, according to the official who spoke on the condition of anonymity because he isn’t authorized to discuss details of Assange’s behavior.

Then there was the issue of Assange’s poop, which authorities said he spread across embassy walls on at least one occasion in an act of open defiance showing how little he thought of his hosts.

“When you’re given shelter, cared for and provided food, you don’t denounce the owner of the house,” Moreno said Thursday to applause.

Within months of taking office in 2017, Moreno’s government scolded Assange again for meddling in international affairs by voicing his support for Catalan secessionists from the Ecuadorian Embassy.

Relations grew so prickly that last year Ecuador increased its restrictions on his Internet access and required him to clean up after his cat James. The rules said that if the feline wasn’t properly fed and cleaned up after, it would be sent to the pound.

Assange tried challenging the restrictions in Ecuadorian court, to no avail.

More recently, as the feuding became more public, he started physically and verbally harassing his caretakers, accusing them of being U.S. spies looking to exchange information on WikiLeaks in exchange for debt relief for Ecuador.

Foreign Minister Jose Valencia said in an audio recording a few months ago captured a moment when Assange threatened Ambassador Jaime Merchan with pressing something of a panic button that he said would bring devastating consequences for the Embassy in the event of his arrest. Although it wasn’t clear what he meant by the threat, authorities shared their concerns with British authorities and in carrying out the raid Thursday were careful to prevent Assange from returning to his room to execute any possible emergency plans.

The final straw for Moreno was WikiLeaks’ decision to spread information about a purported offshore account controlled by the president’s brother. Personal photographs of Moreno lying in bed, as well as images of close family members dancing, were also leaked, further incensing him.

Was Julian Assange expelled from the embassy over leaked picture of a lobster? https://t.co/CbDF3YvmOw @MailOnline

↓ An embarrassing photo of President Lenin Moreno lying in bed enjoying a plate of lobster emerged as Ecuador is experiencing austerity. pic.twitter.com/85X6VsN7Pb