Venezuela pledges to honor oil commitments to Cuba despite sanctions 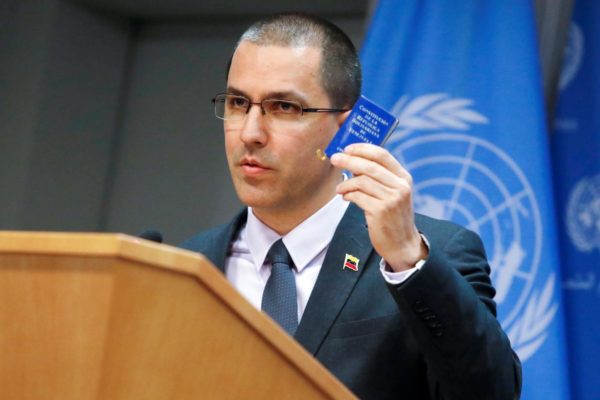 FILE PHOTO: Venezuelan Minister of Foreign Affairs Jorge Arreaza displays a copy of the Constitution of Venezuela as he delivers remarks in the press briefing room at the United Nations Headquarters in New York, U.S. February 12, 2019. REUTERS/Andrew Kelly
Share:

Venezuela will “fulfill its commitments” to Cuba despite United States sanctions targeting oil shipments from the South American country to its ideological ally, Foreign Minister Jorge Arreaza said on Monday.

Washington on Friday imposed sanctions on 34 vessels owned or operated by state-run oil company Petroleos de Venezuela as well as on two companies and a vessel that have previously delivered oil to Cuba, aiming to choke off a crucial supply of crude to the Communist-run island.

Venezuela has long sent subsidized crude to Cuba. The United States describes the arrangement as an “oil-for-repression” scheme in which Havana helps socialist President Nicolas Maduro weather an economic crisis and power struggle with the opposition in exchange for fuel.

Arreaza said he would not reveal Venezuela’s “strategy,” but that the sanctions would not stop the shipments.

“When the conventional power of capitalism attacks you, you have to know how to respond through non-conventional means, always respecting international law,” Arreaza told reporters.

Friday’s measure came after broader sanctions Washington had slapped on PDVSA in January as part of its bid to oust Maduro.

The United States, along with most Western nations, recognizes Juan Guaido, the leader of the opposition-controlled National Assembly, as Venezuela’s rightful leader. Guaido invoked the country’s constitution to assume an interim presidency in January, arguing Maduro’s May 2018 re-election was a sham.

The opposition last month ordered an end to oil shipments to Cuba, but PDVSA – controlled by military officers loyal to Maduro – has continued the exports.

The only tanker sanctioned on Friday, the Despina Andrianna, is currently returning to Jose after unloading crude at Cuba’s Cienfuegos refinery in March. Another three vessels are waiting off Venezuela to load with shipments destined for Cuba.