Aoun concerned over occupied Lebanese lands after US Golan decision 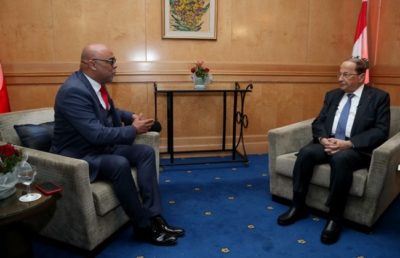 Commenting on U.S. President Donald Trump’s recent decision to recognize Israel’s sovereignty over the Golan Heights, the president said: “Jerusalem was lost, the Golan is also being lost and we’re afraid that the Lebanese Shebaa Farms and Kfarshouba Hills will be next.”Aoun called the Arab Spring Arab Hell

France to give Lebanon defense equipment

“We have opened a financing account of 400 million euros (about 449.3 million U.S. dollars) for this purpose,”French Ambassador to Lebanon Bruno Foucher  was quoted as saying by the National News Agency. Foucher said that France is committed to its military support for Lebanon and the Lebanese Armed Forces.

WHO calls for Universal Health Coverage(UHC) in Lebanon

Dr Iman Shankiti, WHO Representative in Lebanon, said, “Despite all challenges, the political will and commitment of Lebanon towards achieving UHC has been impressive. Primary health care will help us reach Health for All and build a more sustainable and resilient Lebanese health care system. WHO will continue to support the Ministry of Public health in its journey to reach UHC.

Threat of US sanctions looms over Lebanon’s Hezbollah allies

Hanin Ghaddar, a visiting fellow at the Washington Institute for Near East Policy, told Al Jazeera that, according to her sources, Pompeo warned President Michel Aoun of the Free Patriotic Movement (FPM) and Speaker Nabih Berri of the Amal movement, with personal sanctions.”I checked with people who were present at the dinner organised for Pompeo. They confirmed to me that he told both Aoun and Berri that they would be sanctioned unless they pull the reins on Hezbollah,” Ghaddar said.Progressive Socialist Party leader ex-MP Walid Jumblat

Jumblat: defensive decisions should be exclusively in the hands of the Lebanese Army

Progressive Socialist Party leader  Walid Jumblatt criticizes  Hezbollah arms. After the pro-Hezbollah media outlets revealed  the party’s ties with Jumblatt had been “severed,” Jumblatt stressed that “the security and defensive decisions in the face of the enemies should be exclusively in the hands of the Lebanese Army.”