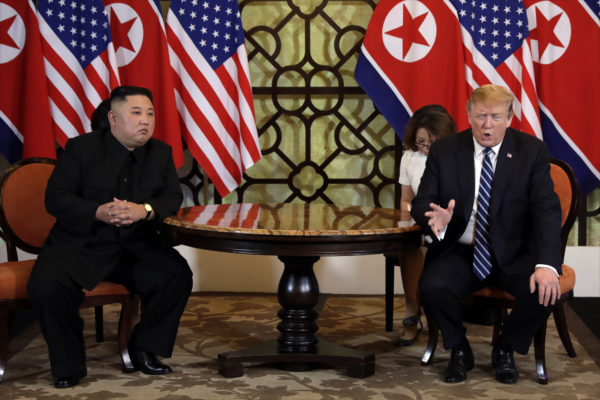 The table was set, with flowers in vases and menus tucked inside white napkins. Water glasses were filled. Wicker fans provided a cool breeze.

That was the first indication something was up at President Donald Trump’s two-day summit with North Korea’s Kim Jong Un.

But what did it mean for the prospects of denuclearizing?

Reporters and photographers assembled to record the leaders’ lunchtime chitchat were hustled out of the room and eventually from building in anticipation of Trump’s departure.

Was Trump staging an exit as a negotiating tactic to put more pressure on Kim? Might the two leaders appear at a joint news conference to announce progress toward a deal?

Those theories soon proved meritless. Trump and Kim’s motorcades left moments apart on diverging routes back to their hotels.

In a statement, Sanders said the summit was over. There was no deal.

The summit that had started amicably enough had collapsed.

“Sometimes you have to walk,” Trump said at a closing news conference.

It was a dramatic reversal for a summit that had kicked off Wednesday with friendly greetings, laughter and lots of arm-touching by Trump at a luxury hotel in Hanoi.

When the talks resumed Thursday morning, Kim likened the scene of the two leaders, who had once denounced one another as “Little Rocket Man” and “deranged,” sitting side by side to a “fantasy movie.”

Trump reported that at dinner the night before, there were “a lot of great ideas being thrown around.”

By lunchtime, not so much.

The two men met privately in the morning for about 35 minutes and then walked to an outdoor pool area, where they were joined by U.S. Secretary of State Mike Pompeo and his North Korean counterpart.

But it was humid and the air was sticky, so they moved to a glass-enclosed, air-conditioned room off the patio.

The four, plus two interpreters, spoke for about 70 minutes in what was described as an “informal” session.

Trump and Kim took a 15-minute break and then reconvened, this time with more officials.

At the start of that final meeting, journalists invited in for a photo opportunity witnessed something unheard of: Kim answering questions from foreign reporters — not just one, but several.

And then he shooed them away.

“If you would kindly give us more time between us, because you know one minute, even one minute’s more precious to us,” Kim said through a translator.

Next on the schedule was the lunch that never happened, followed by a signing ceremony for a joint agreement that was advertised on Trump’s public schedule. But there was nothing to sign.

Instead, Air Force One took off two hours early. Trump was returning to Washington without a deal.