Brexit: Second defeat for Theresa May in 24 hours 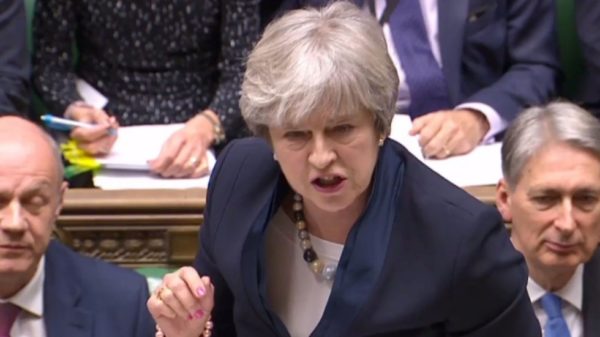 Rebel Conservative MPs have joined forces with Labour to inflict a fresh blow on Theresa May’s government in a Commons Brexit vote.

It means the government will have to come up with revised plans within three days if Mrs May’s EU withdrawal deal is rejected by MPs next week.

It could also open the door to alternatives, such as a referendum.

No 10 said Mrs May’s deal was in the national interest but if MPs disagreed, the government would “respond quickly”.

The setback for the PM came as MPs started five days of debate on the withdrawal agreement with the EU, and the framework for future relations, ahead of the meaningful vote next Tuesday.

The government was expecting to have 21 days to come up with a “plan B” for Brexit if, as widely expected, Mrs May’s deal is voted down.

But MPs backed calls for it to respond within three working Parliamentary days, a deadline likely to fall on Monday 21 January.

Theresa May lost by 11 votes, with 297 MPs siding with the government and 308 against.

Among those voting against were 17 Conservatives, including former ministers Justine Greening, Sam Gyimah and Jo Johnson who want to see another referendum to decide whether the UK should leave or not.

Former attorney general Dominic Grieve, the Conservative MP who led the rebellion, said he hoped for a “serious dialogue” between government and Parliament on alternatives to Mrs May’s deal to avert a possible crisis.

He told ITV’s Peston that it would be up to Mrs May to decide what she wanted to do if her deal was rejected, but MPs would be able to vote on any motion she put forward within seven days.

While the PM would have the right to say she wanted the Commons to re-consider her deal, he said MPs could amend the motion, telling her in effect “we want you to do something else”.

Fellow rebel Sarah Wollaston said she and other MPs opposed to a no-deal exit were engaged in a “guerrilla campaign” to show that it would never get the consent of Parliament.