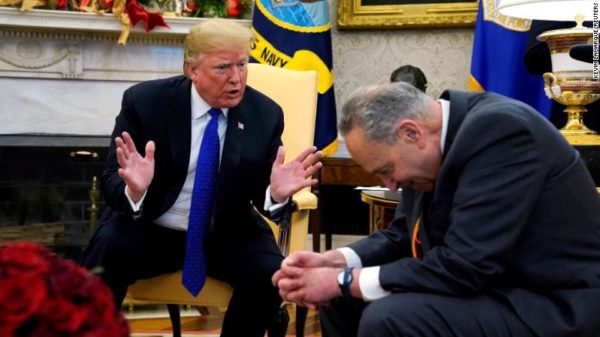 Few signs a government shutdown deal is near. President Donald Trump abruptly walked out of a closed-door meeting with congressional leaders Wednesday in the White House Situation Room after Speaker Nancy Pelosi, D-Calif., said she wouldn’t fund his border wall even if he ended the government shutdown.Senate Minority Leader Chuck Schumer, D-N.Y., (R) said, Trump slammed the table.’Then we have nothing to discuss’ …He just walked out of the meeting.”
Share:

President Donald Trump abruptly walked out of a closed-door meeting with congressional leaders Wednesday in the White House Situation Room after Speaker Nancy Pelosi, D-Calif., said she wouldn’t fund his border wall even if he ended the government shutdown.

“She said ‘No,'” Senate Minority Leader Chuck Schumer, D-N.Y., said, adding that Trump slammed the table. “He said, ‘Then we have nothing to discuss’ …He just walked out of the meeting.”

Trump quickly confirmed Schumer’s version of events in a tweet, making the details of the testy exchange the only thing the president and his Democratic counterparts could agree on in their fight over reopening a partially closed federal government and funding a border wall.

At one point, a congressional aide familiar with the meeting said, Schumer asked Trump why he wouldn’t open the government to relieve the suffering of Americans hurt by it.

“Because then you won’t give me what I want,” Trump responded, according to the aide.

White House officials described the president as calm during the meeting and one said afterward that he felt that he had called their bluff by offering to end the shutdown immediately if Democrats would agree to his border-security demands.

Several federal agencies have been shut down since Dec. 22. Trump has demanded that Congress include $7 billion in border security and humanitarian aid — including $5.7 billion in money for the wall — in any spending bill to re-open the parts of the government that have been shuttered for nearly three weeks.

As he met with Republican and Democratic leaders and Vice President Mike Pence, the White House issued a threat to veto a series of House spending bills that would open individual agencies because they don’t include money for the wall. The threat said Trump’s advisers “would recommend” that he veto the bills, rather than using the stronger language that the “president would” veto the bills that the Office of Management and Budget sometimes uses.

Pelosi opened her remarks after the meeting by describing the discussion as frigid.

“It’s cold out here, and the temperature wasn’t much warmer in the Situation Room,” she said outside the White House.

Pelosi cast Trump, the wealthy son of a real-estate developer, as insensitive to the plight of government workers who are due to miss paychecks this week.

“He thinks they could maybe just ask their father for more money, but they can’t,” she said.

Vice President Mike Pence said Trump has been clear about his priorities all along and that Republicans will “stand firm” on keeping the government shut down until Democrats agree to build the wall.

And, though Trump had just walked away from the actual negotiating table, Pence said Democrats “should come back to the table” to work on a plan to build the wall and fund the government.

Trump is scheduled to visit the southern border near McAllen, Texas, on Thursday, and he has said that he is considering declaring a national emergency to give himself greater authority to direct his administration to build a wall if Congress doesn’t appropriate money for that purpose.

The Pentagon, which undertakes military engineering and construction projects, has $4 billion in authority to transfer existing funds if the secretary of Defense deems such a move to be in the “national interest” — regardless of whether the president declares an emergency. But there are conditions on shifting the money around that could turn the maneuver into a major political and legal fightbetween Congress and the White House.