‘You know what? It’s yours’: Trump reportedly told Turkish president about Syria 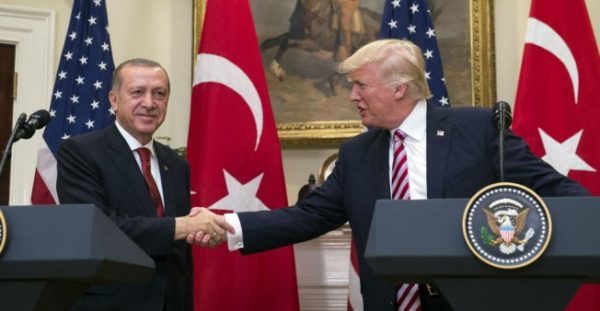 Capping off what has been a tumultuous week for the Trump administration are reports from multiple outlets that offer some clues as to why President Donald Trump made his decision to pull US troops out of Syria that prompted Defense Secretary James Mattis to resign.

That development materialized last Friday during a call with Turkish President Recep Tayyip Erdogan, after Erdogan asked Trump why there were still 2,000 US troops in Syria if the Islamic State had been defeated.

“You know what? It’s yours,” Trump said, according to The Washington Post. “I’m leaving.”

The Associated Press reported that members of Trump’s national-security team, including Secretary of State Mike Pompeo and Mattis, wrote out talking points to dissuade Turkey from bringing troops into northern Syria and attacking Turkish Kurds, which would put US forces at risk. The US is allied with the Turkish Kurds in Syria, providing them with supplies and training in the fight against the Islamic State.

But both The Post and the AP explain that Trump went rogue.

“The talking points were very firm,” one official told the Associated Press. “Everybody said push back and try to offer (Turkey) something that’s a small win, possibly holding territory on the border, something like that.”

John Bolton, Trump’s national security adviser, also allegedly explained on the call that a victory against the Islamic State would need to mean more than just a loss of territory.

Trump, however, sided with Erdogan, and the AP reported that even Erdogan cautioned Trump on pulling troops out too hastily.

Attempts by his national-security team to change course were not successful, and on Wednesday, Trump tweeted out a video where he said that he was withdrawing troops from Syria — catching lawmakers off guard. On Thursday, it was reported that Trump is also cutting down the number of troops in Afghanistan by half.

Mattis, having failed to talk Trump out of leaving Syria, submitted a scathing resignation letter on Thursday, rebuking Trump’s “America first” foreign policy and stressing the importance of maintaining alliances.

Lawmakers — including some Republicans that have previously backed Trump— have warned that pulling out of Syria would be a boon for US adversaries. They also expressed dismay at leaving the Kurds, who will likely face an invasion by Turkey.

“If you decide to follow through with your decision to pull our troops out of Syria, any remnants of ISIS in Syria will surely renew and embolden their efforts in the region,” a letter from four Republican senators explained.

“The withdrawal of American presence from Syria also bolsters two other adversaries to the United States, Iran and Russia,” they continued. “As you are aware, both Iran and Russia have used the Syrian conflict as a stage to magnify their influence in the region. Any sign of weakness perceived by Iran or Russia will only result in their increased presence in the region and a decrease in the trust of our partners and allies.”