US Federal government shutdown to begin at midnight 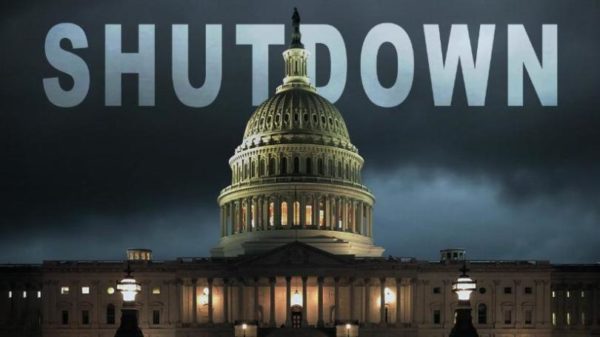 A partial federal government shutdown will begin at midnight now that House and Senate lawmakers have adjourned until Saturday amid a flurry of last-minute negotiations that failed to end a budget standoff.

Congressional leaders and the White House worked behind the scenes late Friday in hopes of striking a deal.

But the House went home just before 7 p.m. and the Senate adjourned roughly an hour later, assuring that a quarter of the government would run out of money and be forced to shut down at midnight.

Once it became a foregone conclusion, Trump took to Twitter, where he acknowledged the inevitability of a shutdown in a video posted late Friday night.

Trumped called for bipartisanship while he continued to insist that it is a “Democratic shutdown.” In a departure from his remarks at the White House earlier in the day, when he said he was prepared for a long shutdown, the president said in the video that he hoped the lapse in government funding would not last long.

“We’re going to have a shutdown. There’s nothing we can do about that, because we need the Democrats to give us their votes,” Trump said. “We need their help to get this approved.”

For much of yet another chaotic day on Capitol Hill, lawmakers scrambled to piece together a last-minute agreement that would keep government funds flowing past Friday’s midnight deadline.

At midafternoon, Vice President Mike Pence and two of Trump’s top lieutenants – Budget Director Mick Mulvaney and adviser Jared Kushner – traveled to the Capitol for a series of meetings to try to broker a deal.

An agreement proved elusive, but in what was hailed as a bit of a breakthrough, congressional leaders and the White House agreed to continue their talks after a procedural vote in the Senate. Yet even that incremental step required a tie-breaking vote by Pence.

“I hope Senate Democrats will work with the White House on an agreement that can pass both houses of Congress and receive the president’s signature,” Senate Majority Leader Mitch McConnell, R-Ky., said from the Senate floor.

Senate Democratic leader, Chuck Schumer, of New York, pledged to continue the discussions, but said it was clear there are not enough votes to pass a spending measure that includes funding for a wall along the nation’s southern border.

The fight over border wall funding is what led to the budget impasse. Trump has demanded $5 billion for a wall – one of his signature campaign promises – and refused to sign a bill passed by the Senate because it did not include the money. That bill would have funded the government through Feb. 8.

The House later passed its own bill to fund the government through Feb. 8 and provide $5 billion for Trump’s wall and nearly $8 billion in disaster aid. That measure stalled in the Senate, setting the stage for a congressional, White House showdown.

At midnight, nine federal agencies and several smaller departments will run out of money, triggering a shutdown heading into the holidays and forcing some 800,000 federal employees to go on furlough or work without pay.

Amid a series of shutdown-related tweets on Friday, Trump sought to pin the looming shutdown on Democrats, even though he said repeatedly during his campaign for president that he would make Mexico pay for a border wall

“The Democrats, whose votes we need in the Senate, will probably vote against Border Security and the Wall even though they know it is DESPERATELY NEEDED,” he wrote via Twitter. “If the Dems vote no, there will be a shutdown that will last for a very long time. People don’t want Open Borders and Crime!”

Trump also tweeted a photo of what he said was a design for the wall, calling it “totally effective while at the same time beautiful.”

Schumer placed the blame squarely on Trump and noted that, just a week ago, Trump boasted that he’d be “proud” to shut down the government and would accept responsibility.

“You will not get your wall,” he said bluntly.

Congress is scrambling to pass a short-term spending bill because lawmakers still haven’t passed seven of the 12 appropriations bills that are needed to fund the government for the fiscal year that began Oct. 1.

The seven remaining bills would fund the nine departments – Agriculture, Commerce, Justice, Homeland Security, Interior, State, Transportation, Treasury and Housing and Urban Development – as well as several smaller agencies. Those are the departments and agencies that will be impacted by a government shutdown.