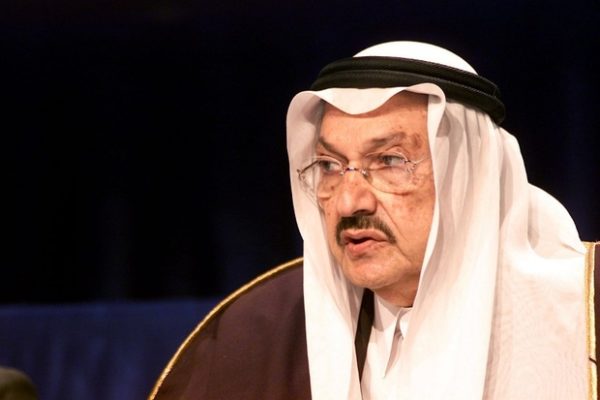 The senior member of the al-Saud family, father of billionaire investor Alwaleed bin Talal, had been ill for several years.

Prince Talal lived in exile abroad in the 1960s, when Saudi authorities revoked his passport after he led a group of princes demanding constitutional reforms and allied himself with then Egyptian President Gamal Abdel Nasser, the arch-foe of the Saudi monarchy.

Prince Talal returned to the kingdom after Faisal bin Abdulaziz al-Saud become king in 1964, and after toning down his rhetoric.

In 2011 he resigned from the Allegiance Council, the body responsible for overseeing the royal succession in the world’s top oil exporter.

He also supported moves to give Saudi women greater rights to work and allow them to drive, and limit Riyadh’s substantial military spending.

The royal court said funeral prayers would be said for the prince in Riyadh on Sunday. Prince Talal had been hospitalized in Riyadh though it was not clear where he died.

Talal has provided Saudi students foreign education scholarships. He founded Saudi Arabia’s first school for vocational training in 1954 and the first girls’ school based in Riyadh in 1957. He donated his own birthplace palace—Al-Zahra Palace in Taif—for a school in 1957. His private hospital in Riyadh, established in 1956, gives 70% of its profits for free health care and 10% to children’s health care. He then later donated the hospital to the government and is presently called King Abdulaziz University Hospital.

According to Riz Khan, “Prince Talal spent his postpolitical years developing humanitarian work, shedding the epithet ‘The Red Prince’ and becoming known as ‘The Children’s Prince’ for his work with UNICEF, the United Nations Children’s Fund.”

In September 2007, he announced his desire to form a political party to advance his goal of liberalizing the country.

Prince Talal is the chairman of Arab Gulf Program For The United Nations Development (AGFUND), which promotes socioeconomic development in the Middle East. As part of AGFUND, he has led the board of trustees of the Arab Network for NGOs based in Cairo and established Arab Open University.He has also supported training of women through AGFUND. Through AGFUND, he provided significant monetary support for UNICEF and UNICEF declared him as its Special Envoy in 1980. He became UNESCO‘s Special Envoy for Water in 2002 to encourage the development of safe water.

He is the president of the Arab Council for Childhood and Development. He also helped create the Mentor Foundation and is honorary member on its board of trustees.  He co-founded the Independent Commission for International Humanitarian Issues. He is also a prominent member of the League for Development of the Pasteur Institute and the honorary president of Saudi Society of Family and Community Medicine.

Prince Talal was born on 15 August 1931 as the twentieth son of King Abdulaziz. His mother was an Armenian woman, Munaiyir, whose family escaped from the Armenian Genocide experienced under the reign of the Ottoman Empire.

Prince Talal was the full brother of Prince Nawwaf. During the reign of their half brother King Saud, they became bitter enemies, to the point of contesting their inheritances.

Prince Talal is known to have wed four times.

His second wife was Princess Mona Al-Solh, the daughter of Riad Al Solh, the first prime minister of Lebanon. Their children are Prince Al-Waleed bin Talal,  Prince Khaled bin Talal and Princess Reema. The marriage collapsed in 1962; they remained separated until their divorce in 1968 .