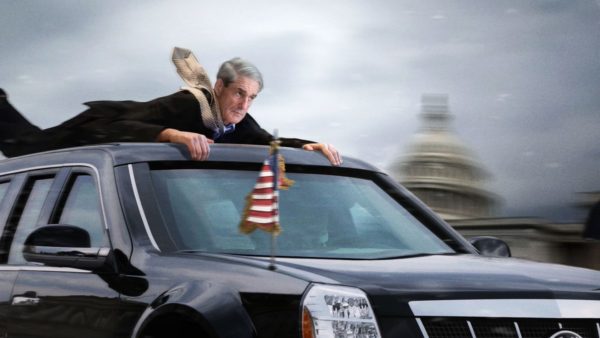 WASHINGTON — For the past several months, journalists, legal experts and close followers of the special counsel’s investigation have been trying to uncover one particular secret about the inquiry: Is the special counsel, Robert S. Mueller III, in a closed-door legal battle? If so, with whom?

In October, Politico reported that Mr. Mueller appeared to be in a secret fight with a witness who was refusing to testify before a grand jury investigating Russia’s efforts to interfere in the 2016 election. A CNN journalist reported seeing two of Mr. Mueller’s top prosecutors enter a courtroom in September to argue against lawyers for an unnamed client before a judge who deals with grand jury matters.

A confidential hearing in the dispute was held on Friday at the federal courthouse in Washington. One floor of the building was closed to protect the identities of the lawyers involved. But that failed to deter roughly a dozen reporters who were spotted rummaging around the courthouse trying to figure out who was involved.

Here is what we know, and do not know, about the battle:

What exactly is this fight about?

From the clues that have emerged, it appears that the dispute is about whether a witness can be forced to answer investigators’ questions. When witnesses refuse to cooperate, prosecutors often go to court to get a judge to send them to jail in order to pressure them to talk. Prosecutors are supposed to exhaust all other investigative avenues before doing this.

Does this dispute involve President Trump?

A former federal prosecutor argued in an opinion article in October that the dispute could very likely be between Mr. Mueller and President Trump about whether the president had to sit for an interview.

But that does not seem to be the case. The president’s lawyers have said on the record that they are not involved in any litigation with the special counsel’s office, and that the president has not been subpoenaed.

“We’re not involved in it — we’re not aware of the nature or scope of the litigation,” Jay Sekulow, one of the president’s lawyers, said on Saturday.

Mr. Mueller’s investigators and Mr. Trump’s lawyers were still negotiating as recently as this past week about whether Mr. Trump would sit for an interview, according to a person briefed on the matter. That means talks are continuing even after Mr. Trump answered a few of Mr. Mueller’s questions in writing last month. If those talks ultimately break down, Mr. Mueller could seek to subpoena the president.

At that point, Mr. Trump’s lawyers would most likely publicly announce that Mr. Trump had been subpoenaed as a way of trying to bolster their repeated claims that Mr. Mueller is conducting a witch hunt to take down the president.

“I don’t see why we wouldn’t,” Rudolph W. Giuliani, one of Mr. Trump’s lawyers, said about whether they would go public with a subpoena.

What do the investigators want to ask about?

Mr. Mueller is investigating two chief issues: Did the Trump campaign collude with the Russians, and has the president obstructed justice by interfering in the Russia investigation?

Investigators have interviewed nearly all the White House and Justice Department officials who were directly involved in the episodes under scrutiny in the obstruction inquiry. But Mr. Mueller is still seeking to speak with several witnesses about ties between Mr. Trump’s campaign and Russia.

In particular, Mr. Mueller wants to learn what the campaign knew about WikiLeaks’s plans to release Democratic emails hacked by the Russians in the months before the election. As part of that inquiry, Mr. Mueller is closely examining whether one of Mr. Trump’s longtime associates, Roger J. Stone Jr., was a conduit between WikiLeaks and the campaign. Mr. Mueller is fighting a legal battle with an associate of Mr. Stone’s who is refusing to testify before a grand jury and hand over documents.

Will we ever learn who the person is?

Maybe. The person is most likely not barred from speaking publicly about the case, but because the proceeding has been sealed, the lawyers involved cannot discuss it. If the witness ultimately loses and the court orders jail time, then it would most likely become public.

Are these types of disputes typical in federal investigations?

Similar disputes often arise in cases in which prosecutors are trying to identify government officials who have leaked classified information to reporters. In those instances, reporters often refuse to answer investigators’ questions, forcing judges to decide whether to jail them.

In high-profile investigations that involve celebrity defendants or organized crime figures, witnesses who are loyal to the person under investigation occasionally refuse to cooperate with investigators. A decade ago, federal prosecutors asked a judge to jail the trainer of the baseball slugger Barry Bonds, who was under investigation for using performance-enhancing drugs. The trainer spent a year in jail as he refused to testify about whether he had given drugs to Mr. Bonds, significantly hurting the government’s case.