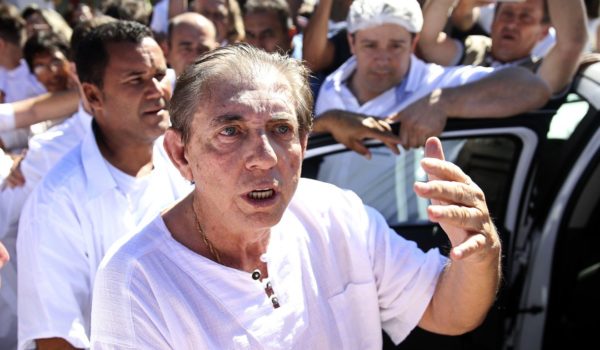 Joao Teixeira de Faria, 76, known internationally as “Joao de Deus” or “John of God,” told a crowd of white-clad faithful waiting for him “I am not guilty.” Brazilian authorities issued an arrest warrant on Friday accusing him of sexually abusing hundreds of female patients.
Share:

The whereabouts of Joao Teixeira de Faria, 76, commonly known as ’John of God’, are currently unclear. In an appearance at his clinic on the outskirts of Brasilia earlier this week Faria denied the allegations against him.

By Friday evening public prosecutors in the Brazilian state of Goias had received 335 complaints since the first accusations against Faria became public last weekend. Women, teenagers and even children — including his own daughter — are among the medium’s alleged victims. The charges represent the first time a well-known male public figure has faced investigation in Brazil for accusations of sexual abuse since the start of the #MeToo era. Former patients from across Brazil as well as the U.S., Germany and Australia have contacted the authorities.

“This case of John of God is really emblematic because he’s someone who is known internationally,” said Carolina Vicentin, one of the co-founders of the Brazilian feminist magazine AzMina. “But this type of thing is not unusual. The problem is that women are deterred from making accusations.”

With over 60,000 rapes reported in the country in 2017, Brazil remains a deeply macho country where violence against women is commonplace. Surveys by polling company Datafolha show that one in every three Brazilian women suffered some kind of aggression in 2017, while 42 percent had experienced sexual harassment.

In a 2014 poll, 26 percent of Brazilians agreed partially or totally with the statement “women who wear clothes that show off their bodies deserve to be attacked,” according to the Institute of Applied Economics (Ipea).

Meanwhile, women make up just 15 percent of lower house lawmakers. President Michel Temer did not appoint a single woman to his first cabinet in May 2016. President-elect Jair Bolsonaro has appointed just two women to the twenty-two ministerial posts in his incoming administration.

Consulted by Brazilian presidents and lauded by international celebrities, including Oprah Winfrey, Faria established himself as the country’s pre-eminent healer, offering surgery to the sick guided only by spirits. The medium visited Temer in hospital last year, while former president Luiz Inacio Lula da Silva sought his assistance during his treatment for cancer.

Thousands travel to Faria’s clinic in the center-west town of Abadiania for treatment every week, and its economy is almost entirely based on tourism. Calls to the clinic for comment went unanswered.