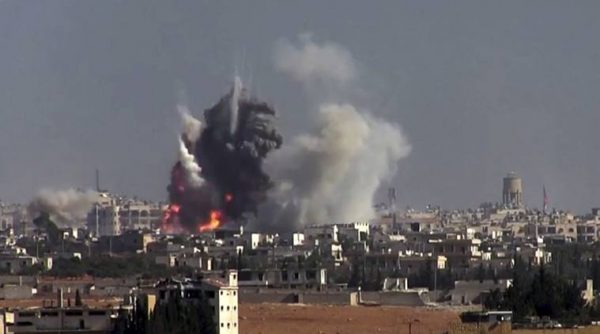 Russian warplanes carried out air strikes against militants for firing shells filled with chlorine gas in the Syrian city of Aleppo. But rebel officials denied using chemical weapons and accused the Damascus regime  of trying to frame them.

The Russian Defence Ministry said on Sunday its warplanes had carried out air strikes against militants it says are responsible for firing shells filled with chlorine gas in the Syrian city of Aleppo.

Russian news agencies cited Major-General Igor Konashenkov as saying that the strikes had destroyed all of their targets and that Russia had warned Turkey (which backs some rebel factions and has brokered a ceasefire with Moscow in the Idlib region) of the bombing raid in advance via a telephone hotline.

Earlier on Sunday, Moscow, a key Damascus ally, accused insurgents of poisoning 46 people, including eight children, in the attack, while the state news agency SANA reported “107 cases of breathing difficulties”.

The Russian defence ministry said the attack on Aleppo, a regime-held city, was launched from territory that former al-Qaeda militants control in the rebel stronghold of Idlib.

The Syrian Observatory for Human Rights, a Britain-based monitor, said a total of 94 people were hospitalised, but most had been discharged and the 31 cases that remained were not critical.

It marks the highest such casualty toll in Aleppo since government forces and their allies clawed back the city from rebels nearly two years ago.

Rebel officials denied using chemical weapons and accused the Damascus government of trying to frame them.

“They were taken to al-Razi hospital and Aleppo University Hospital for treatment as a result of the irritating substance they inhaled.”

Pictures and footage on SANA showed medical workers carrying patients on stretchers and helping them with oxygen masks.

“We can not know the kinds of gases but we suspected chlorine and treated patients on this basis because of the symptoms,” Zaher Batal, the head of the Aleppo Doctors Syndicate, told Reuters.

Batal called it the first such gas attack in Aleppo city in the conflict, which has raged for more than seven years.

Abdel-Salam Abdel-Razak, an official from the Nour el-Din al-Zinki insurgent faction, said rebels did not own chemical weapons or have the capacity to produce them.

“The criminal regime, under Russian instructions, is trying to accuse the rebels of using toxic substances in Aleppo. This is purely a lie,” he wrote on Twitter.

Speaking Sunday at a press conference for the Brexit summit in Brussels, French President Emmanuel Macron said he “did not have enough information to comment” on the alleged chemical attack.