‘Not him!’ cry thousands of anti-Bolsonaro protesters as they march across Brazil 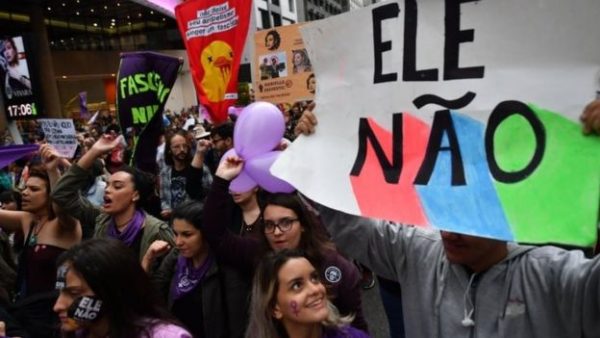 Not him, reads the banner carried by anti-Bolsonaro demonstrators on Saturday
Share:

Thousands of people have taken to the streets in Brazil to protest against far-right front-runner Jair Bolsonaro a week before the second round of the presidential vote.

The rallies took place one week before Brazilians return to the polls on October 28 for the second round of voting.

In front of the famous Sao Paulo Art Museum, people beat drums and waved gay pride flags and banners thereby denouncing Bolsonaro, who is known for his offensive comments about gays, women and black people.

Bolsonaro, a former army captain, won the first round on October 7, getting 46 percent against 29 for Fernando Haddad of the Workers’ Party (PT) that governed Brazil between 2003 and 2016.

Haddad replaced jailed party founder Luiz Inacio Lula da Silva on the PT ticket after the former president was banned from running due to a corruption conviction.

With a growing lead in opinion polls, Bolsonaro has said the presidency is “within reach,” although he has been unable to campaign due to a near-fatal stabbing during a rally last month.