NAFTA out, USMCA in : What’s new in the US, Canada and Mexico trade deal? 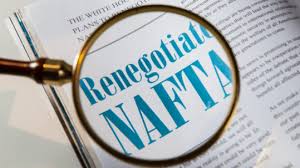 The United States, Canada and Mexico came to a last minute agreement on a revised trade deal that could replace NAFTA. It’s called the USMCA.

President Donald Trump and his Mexican and Canadian counterparts are expected to sign the deal by the end of November. It will then be up to Congress to approve the deal, which is likely to come up for a vote next year.
Negotiations between Canada and the United States pushed right up to a deadline imposed by the Trump administration Sunday night, and details of the agreement were starting to emerge..
Here are the biggest changes between the nearly 25-year-old NAFTA agreement and the new provisional USMCA.

In a win for the United States, USMCA will open up some of Canada’s dairy market to US farmers. The issue was a big sticking point between the two negotiating teams.
Under the original NAFTA, Canada limited how much milk, cheese and other dairy products could come in from the United States.
But under the updated agreement, Canada will set new quotas for the United States. It will increase market access for US dairy, poultry and eggs. In return, the United States will allow more Canadian dairy, peanuts and peanut products, and a limited amount of sugar to cross the border, according to a document from US Trade Representative’s Office.
Canada has also agreed to end a system that had kept the price of some milk products, including milk protein, low. This change will also allow more US dairy products to enter the Canadian market.
The Dairy Farmers of Canada quickly came out to criticize the new trade agreement, claiming it puts the livelihood of Canadian dairy producers at risk.
Canada recently made concessions in the Trans-Pacific Partnership and a trade deal with the European Union that also opened up its dairy market.

The new deal will require more of a vehicle’s parts to be made in North America in order for the car to be free from tariffs.
It requires that 75% of the parts must be made in Canada, Mexico or the United States, about 12 percentage points higher than under the original NAFTA.
The provision will help keep the production of car parts in the United States and bring back some production that moved abroad, the USTR said.
Ford Motor Company applauded the agreement because it will “support an integrated, globally competitive automotive business in North America

Renew it or lose it.
The United States had wanted to include in the new agreement a clause that would kill NAFTA after five years unless all three countries agreed to renew it.
Instead, negotiators stitched into the updated treaty new terms of the deal, agreeing to keep the trade pact for 16 years, unless all three countries agreed to extend it.
That means the deadline could be extended far out into the future, if all three countries agreed to either renew or renegotiate the trilateral trade pact.
The United States, Canada and Mexico will be required to meet every six years to decide whether to do so.
The Trump administration had been seeking a shorter time frame of five years in an effort to keep the pact up to date. But Mexico and Canada were less in favor of that proposal arguing it would stunt investment in their countries if the future of the agreement was in question.

Tucked in the agreement is a foreign-exchange provision to deter countries from manipulating their currencies.
The language isn’t likely to impact all three NAFTA countries, which have a free floating exchange rate. Instead, it’s intended as a signal to other countries outside of North America.
Countries frequently commit to avoiding unfair currency manipulations. But the tougher language in the accord could give the United States more leverage in trade negotiations with countries like China.

When countries are found to be in violation of the agreement, there are hard and fast rules how to hold nations accountable. Embedded in the old NAFTA agreement were three kinds.
Two of those dispute settlement systems will remain basically intact, but will be renamed.
The first is a system to resolve state-to-state disputes, formerly known as Chapter 20. The second mechanism is NAFTA’s old Chapter 19, which resolves disputes between two countries on anti-dumping and countervailing duties cases. That will also remain untouched in the new agreement.
One difference is that another settlement process, formerly known as Chapter 11, will be phased out between the US and Canada. But will stick for certain key sectors like oil and gas, infrastructure and telecommunications between the US and Mexico.

The new trade agreement aims to support American workers in several ways.
Most notably, it requires that 40% to 45% of car and truck parts be made by workers earning at least $16 an hour. The goal is to level the playing field between American and Mexican auto workers and to incentivize manufacturers to build more in the United States. One of the main criticisms of NAFTA is that it prompted American car makers to shift production south of the border, where workers earn much less than their US counterparts.
The deal also mandates that 75% of a vehicle’s parts must be made in North America, up from the current 62.5% rule. The Trump administration argues that this will help incentivize billions in new auto sector production in the US.
Also, Mexico has committed to recognize workers’ right to collectively bargain, and the three countries agreed to enforce rights recognized by the International Labor Organization.
President Trump said Monday that the agreement will transform North America back into a manufacturing powerhouse.
“Instead of jobs leaving for overseas, they will be returning back home,” he said in a Rose Garden ceremony.
Experts, however, are still sifting through the documents to determine the actual impact of the agreement.
“The bottom line is that we simply do not have enough information at this time to know whether NAFTA 2018 is in the economic interests of the United States,” AFL-CIO Trade Policy Specialist Celeste Drake wrote in a blog post. “On labor, despite progress, more work remains to be done.”
Some trade experts are skeptical that the deal will boost auto sector employment. In fact, the new mandates may prompt American carmakers to shift production to Japan, Korea or other countries outside North America. They’ll have to pay a 2.5% tariff, but they may find it more economical than adhering to the USMCA rules, said Robert Lawrence, a professor of international trade and investment at Harvard.
“The jobs aspect is uncertain at best,” said Robert Scott, director of trade and manufacturing policy research at the Economic Policy Institute, a left-leaning organization.
One wildcard is whether the Trump administration will try to raise the 2.5% tariff on importing cars and auto parts. The president is considering levying a 25% tariff on imported vehicles, citing national security.

‘Modernizing’ NAFTA for the digital age

The new agreement addresses issues that have emerged over the past 25 years.
For example, it outlines criminal penalties for pirating movies online.
It prohibits duties on digital music, books, software and video games that are distributed electronically.
There are also stronger intellectual property protections, including patents for biotech and financial services.

One big question is how the three countries will resolve disputes over US tariffs on steel and aluminum imports from Canada and Mexico.
For now, that part, along with retaliatory tariffs countries have imposed, were left out of the deal.
That piece will have to be negotiated separately, senior administration officials said.
CNN
Share:
Share Tweet Pin It +1
This error message is only visible to WordPress admins